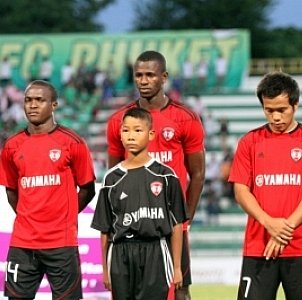 The star striker was a key player in FC Phuket’s promotion to the Football Association of Thailand’s Division 1 last December.

FC Phuket Secretary Sorranan Sanae said, “Diarra will play his last game for Muangthong United at the end of June. He will then be available to play from July 10 onwards for FC Phuket.”

Diarra, from the Ivory Coast (Cote d’Ivoire), scored his first goal for Phuket when they defeated Pattani 3-0 in a Division 2 (Southern Section) match in March of 2010.

Soon after, an injury put Diarra out of action for several games.

His comeback the following July was far from sensational. After Diarra missed a penalty, his team went down 2-0 to Yala FC.

A Diarra goal in August helped his beloved FC Phuket claim a 2-1 victory over Satun and the following week he scored again when FC Phuket beat Hatyai FC.

Diarra’s tally increased during the Toyota Cup campaign when he scored both goals in their 5-2 aggregate loss to Osotspa Saraburi.

After the cup campaign and their victory over Phang Nga, FC Phuket downed Rayong FC 2-0 in the December promotion play-offs to Division 1.

Both goals came from the boot of Diarra – the first a penalty, the second a long-range strike.

Diarra announced his move to Thai Premier League side Muangthong United in January this year.

But after just five months, and with the reason for his sudden return still unknown, Diarra is getting ready to don the green jersey of FC Phuket once more.

Phuket fans will no doubt welcome the news at a time when their team’s on-pitch performances are sorely lacking in substance.