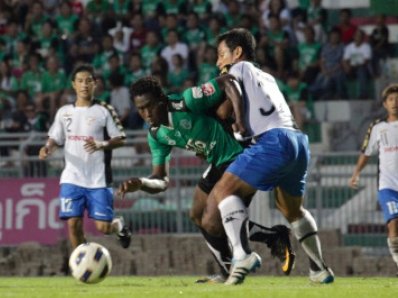 PHUKET: FC Phuket played their best performance of the year last night, delighting the faithful at Surakul Stadium with a 6-1 rout of Thai Honda.

Thawin Butsombat scored just before halftime to put FC Phuket up 2-0, but unfortunately suffered a broken leg from a tackle during his strike at goal.

Seven minutes into the second half Abdol Coulibaly put FC Phuket up 3-0 with another header, after which he prostrated himself to the crowd. It was his first goal for the side following a disastrous own goal that may have cost his side the match at Bangkok United.

Other goals by FC Phuket came at 62 minutes (Chao Jai Won), with Man of the Match Kone Adama netting a brace in the closing stages (79, 92 minutes).

The win moved FC Phuket into a tie for fourth place in the 18-team bracket.

The top three sides are promoted to the elite Thai Premier League.

FC Phuket’s next match is an away game at Samut Prakan next Sunday.

Their next home match is against Saraburi on Saturday, May 21.

For analysis, coaches’ comments, league table and more pick up the next hard copy of the Phuket Gazette.