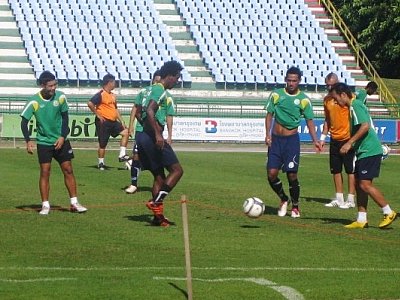 PHUKET: FC Phuket face Big Bang Chulalongkorn United (BBCU) on Sunday in what may be termed a grudge match considering the cup defeat inflicted by Phuket on BBCU in June.

Sunday’s match will be played at the 20,000 seat sporting arena, Army Stadium in Din Daeng, Bangkok. Kickoff is sceduled for 6pm.

Coming into their 19th match, Phuket cling to ninth place in the 18-team league with 25 points from six wins, seven draws and five losses.

Having played the same number of matches, BBCU are in second place with a record of 13 victories, four draws, and only one league defeat by leaders Buriram FC.

Sunday’s match will be the third time Phuket and BBCU have met this season.

The first two matches were hosted at Surakul Stadium on March 13 and June 29, respectively.

In the first league match, a scoreless draw was the result, while Phuket emerged victorious from their second encounter, 2 – 1, advancing into the Toyota League Cup last 16 stage at the expense of BBCU.

That highly charged affair was memorable for the penalty awarded in extra-time which gave Phuket victory.

BBCU will look to avenge that cup defeat, and this time have the home advantage, where they’ve yet to lose a game this season.

In contrast, Phuket have yet to win their first away game in Division One. A fact which tags BBCU as favorites for this match.

Kicking off at the same time in Thailand’s south, third place Songkhla FC will host league leaders, Buriram at the 20,000 capacity, Tinsulanon Stadium.

Judging from recent trends, this match should draw a crowd of up to 15,000 of both loyal “Fighting Bulls” home fans combined with the traveling “Volcano’s” support.

Other TPL Division One league matches scheduled this weekend are as follows:

Yingluck’s official, but who will call the shots?