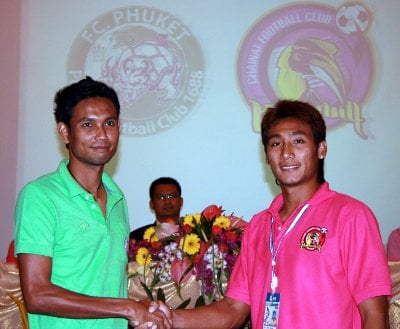 PHUKET: FC Phuket will take on Chainat FC tomorrow in a crunch match that will be crucial to their chances of being promoted to Division 1 of the Thai League.

“Chainat FC is currently favorite to win our group in the playoffs. The game tomorrow is expected to be an interesting one – and exciting,” said FC Phuket Coach Ajharn Songamsub.

“I don’t want to call it a ‘fight’. I would prefer to call it ‘competitive’. All teams still have a chance to make it through, but it depends on who makes the most of their opportunities,” he added.

“It will be a very important game for FC Phuket. We did not win our first two matches [in the playoffs], so tomorrow we expect to win three points,” he said.

“Chainat FC now has six points and leads the table, so we must play carefully,” he added.

“We are glad to visit Phuket. We hope to get at least one point from the game. If we get more than that, then it would be beyond our expectations,” he said.

The game will kickoff at Surakul Stadium at 6pm.

Tickets costs 20 baht for open seats and 50 baht for those under cover.

Tickets can be entered in a lucky draw for mobile phones and gift sets at the FC Phuket gift shop after the game.