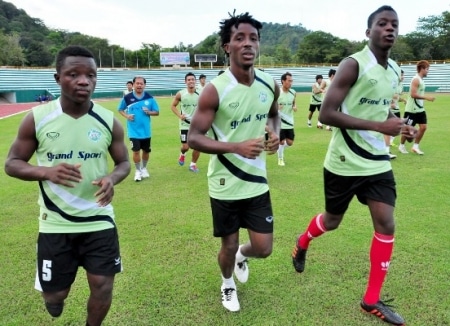 PHUKET: FC PHUKET are looking to get their first home win of the season this evening against Airforce United FC. Kickoff is set for 6:30pm.

Going into the 10th weekend of league play, Phuket are now in 17th place of the 18-team Thai Yamaha 1 league with one win, five draws and three losses.

FC Phuket’s recently appointed new president, Pamuke Achariyachai, the chairman of Kata Group, will present himself to the fans before start of tonight’s game.

Kata Group’s Director Eam Thavornwongwongse who is assigned to take responsibility for FC Phuket said, “We have come to help the team because we don’t want Phuket’s football team to disappear.

“FC Phuket makes a reputation for Phuket province. We will support the team for the budget and will talk with Mr Ravi Lorthong about all the necessary expenses.”

Ko Eam added, “The light system [at Surakul Stadium] is now fixed, this allows us to start the game at 6:30 pm.”

All of Phuket’s previous home matches this year had been held at 4pm due to the stadium’s lighting system having undergone repairs to prepare for the 28th National Youth Games which commences this week.

“The players aren’t exhausted, and the fans working on Saturday will be able to arrive before the start of the game,” he added.

Phuket’s starting lineup will not include its star, Brazilian goal keeper Alonso Goleiro, because the coach said he wants to save his quota of only three [non-Asian] foreign players.

Kornprom Jaroonpong, who was banned last match, will be able to play while Nirun Panthong has also fully recovered from a conjunctivitis condition affecting his right eye and is now in full health.

However, star striker Thawin Butsombat, who has been out for this season and most of last due to injury, has yet to recover enough to play.

Fans tonight will also notice that FC Phuket’s plain shirt has also changed. Their new jersey features the logo of sponsors Yamaha on the chest.

The new shirt is now available at the shop, and will be sold at Surakul Stadium for tonight’s match.