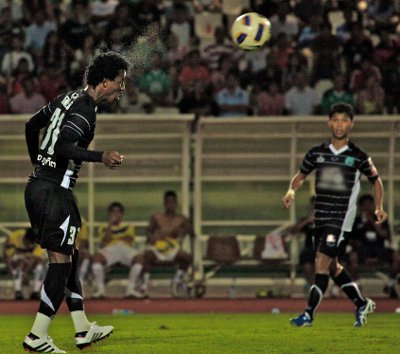 PHUKET: Despite some excellent chances by both sides, FC Phuket and Division One leaders Big Bang Chulalongkorn University (BBCU FC) FC played to a scoreless draw last night before a record crowd at Surakul Stadium.

The final tally barely reflected the intensity of the exciting match.

One of the best opportunities for FC Phuket came at 75 minutes, when Sarach Yooyen fired a free kick on target that was punch-saved by BBCU goalie Shaun Mark.

The ball landed on the right foot of FC Phuket captain Wiratroj Janteng, who narrowly missed the second chance.

The flamboyant BBCU goalkeeper was named “man of the match” for this and several other good saves throughout the encounter.

FC Phuket coach Surachai Jirasirichote expressed disappointment that his side failed to take away three points.

“We had several good scoring opportunities, but failed to convert. Overall the kids played better than they did in their second match and seem to be better adapted to the system, so now the key is finding the scoring touch,” he told reporters.

BBCU FC coach Kiattisak Sanao-muang conceded that FC Phuket were the better team on the day and said he was satisfied a draw.

“We learned something from today’s game that will help us in future matches on the road,” he said.

FC Phuket’s next match is a home fixture against Rangsit JW, whose home ground is Don Meuang Stadium outside Bangkok.

League Table (after three matches each):

Note: The top three teams at the end of season are promoted to the Thai Premier League. The bottom three teams are relegated to the AIS Division 2 Regional league.

Phuket Beach Safety: Why the guards are not there