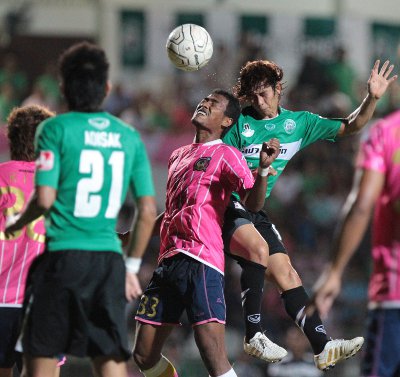 PHUKET: FC Phuket drew 1-1 with Bangkok FC in the Division Two “Champions League” on Saturday, their first match since midfielder Camara Ahmed suffered a heart attack during a match a week earlier.

Teammates lined up before the Saturday kickoff in Bangkok were also wearing the special t-shirts as Mr Ahmed’s brother was introduced to the crowd. A large contingent of Africans attended in a show of solidarity.

Some 50 FC Phuket fans who had made the trip to Bangkok were hoping the defense could hold out for another 45 minutes to give the team a vital win away from home, but it was not to be.

Jirat Kinkkrodklang, later named man of the match, grabbed a brilliant equalizer for the home side after 72 minutes. The draw gave the first point of the competition to Bangkok FC, who are now at the bottom of the six-team grouping.

In other results, Samut Prakarn FC beat Loei City 2-1, and Chainat FC drew 2-2 with Rayong FC to leave Group A wide open. The Southern Sea Kirin are now in third, after a convincing home win and three draws on the road.

FC Phuket’s next match, against fourth-place Loei City on Saturday, is crucial. Kickoff time at Surakul Stadium is 6pm.

The team remains cautiously optimistic about the recovery chances of Mr Ahmed.

FC Phuket Secretary Sorranan Sanae said, “When his brother visited him, he opened his eyes. Whenever his relatives are around, or others people speaking in his language, French, he will always open his eyes.”

However, Mr Ahmed still lacks the ability to roll his eyes or make other movements that would allow him to focus on specific objects, he said.

The brother signed the necessary release forms that will allow doctors to perform a tracheotomy, thus enabling Mr Ahmed to breathe without wearing an oxygen mask, he added.

Doctors said it was still to early to determine if the African will eventually be able to make a return to football.