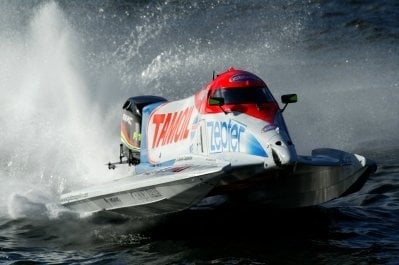 PHUKET: The Formula 1 boat racing that was due to come to Phuket in March 2005 but was canceled following the tsunami, will come in 2008 instead, the Gazette learned today.

Bangkok-based organizers Paragon Events announced that the Phuket race will take place from March 14 to 16, 2008, in the Deep Sea Port at Ao Makham.

“From March 14 to 16, 2008, Phuket will provide the ideal location for the F1 Powerboat Grand Prix, the first World Championship level event in Thailand.

“F1 Powerboats provide the world’s most exciting watersport race, the ultimate test of man and machine – 24 drivers competing in 13 races [at different places] around the globe for the right to be called the F1 UIM Powerboat Champion 2008.”

Now in its 25th year, the F1 Powerboat racing circuit is comparable with Formula 1 car racing and has similar rules.

The Grand Prix is regulated by the Union Internationale Motonautique ( International Powerboating Association, UIM for short).

Qualifying on the Saturday of the race weekend decides which boat is on pole position and the formation of the grid ready for the race day on Sunday, when drivers race for a breathtaking 45 minutes at speeds that exceed 240 kilometers an hour.

The drivers are amongst the fittest athletes in the world, having to be able to handle 6G turns no fewer than 120 times per race, and acceleration from 0 to 100 kmh in just 3.5 seconds.