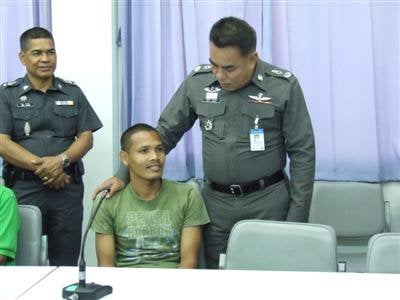 PA KHLOK, PHUKET: Police yesterday afternoon arrested a former Navy sailor for the brutal slaying of his elderly step-father with a sickle.

At a press conference held at Thalang Police Station at 6 pm yesterday, Phuket Provincial Police Commander Apirak Hongtong and Thalang Police appeared with 31-year-old Ittipong “Juekai” Wetchapansombat, who confessed to the killing in front of the media.

At about 1 pm yesterday, Mr Ittipong was sleeping in his small zinc-roofed hut outside his family home in Pa Khlok Village 3 when his employer, 49-year-old building contractor Chalong Ninsamut, stopped by to get him to come to work.

Mr Ittipong’s stepfather, 70-year-old Chod Saraya, tried to rouse him but this so infuriated Mr Ittipong that he set upon Mr Chod with a long-handled rubber tapping sickle kept under his bed, police said.

He slashed his stepfather in the head several times, continuing the attack until the sickle fell off its shaft.

After his stepfather was dead, Mr Ittipong fled in his blood-splattered military-style clothes to a roadside coffee shop near the entrance to the access road to Ao Por Marina, where he was arrested by police less than an hour later.

The murder was reported to police by the suspect’s mother.

Mr Ittipong, who showed no remorse when confessing the crime, has been charged with murder.

“I’m not sad to have killed my stepdad, because he has been beating me since the age of six when he moved in with my mom. More importantly, he wouldn’t allow me to continue to be a sailor,” said Mr Ittipong, who spent two years in the Royal Thai Navy before returning to his native Phuket two years ago.

“He was a miserable person and I was always afraid of him,” said Mr Ittipong, who also alleged that his stepfather had worked as a hired gunman.