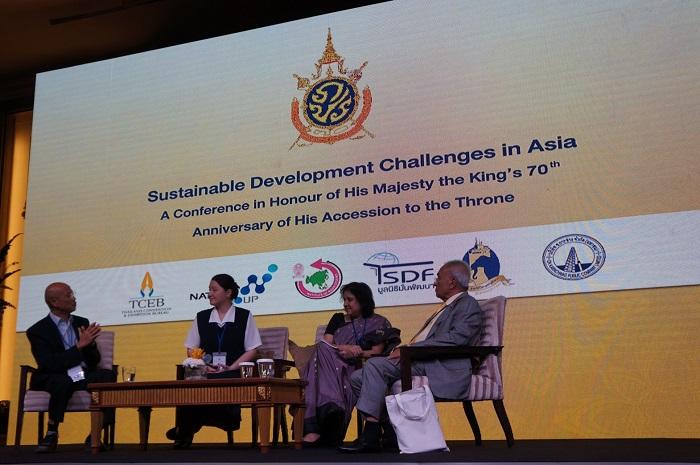 BANGKOK: The nation’s top environmental experts and planners met in Bangkok this week to address the challenges faced in bringing about sustainable development in Asia, in a conference held in honor of His Majesty the King of Thailand’s 70th Anniversary of his accession to the throne.

For the past seven decades, since his accession to the throne, His Majesty King Bhumibol has been the prime role model for sustainable development initiatives. His works on agriculture, the environment, public health, education, job creation, water resources, energy and communications, aim to improve living standards and have been recognized around the world.

This week’s international conference, in honor of His Majesty’s work, takes the debate on sustainable development to another level.

The opening ceremony yesterday was chaired by Prof Bundit Eua-arporn, PhD, the president of Chulalongkorn University.

Keynote speaker Stefanos Fotiou, director of Environment and Development Division, UN Economical and Social Commission for Asia and the Pacific (UNESCAP), believes that the sustainable development philosophy can apply to anywhere, including and especially Phuket.

“Sustainable Development applies everywhere, even in places that today are not sustainable at all. Phuket produces a lot of pollution and waste [as a popular tourist destination]. However, that doesn’t mean that a city renowned for entertainment cannot also apply sustainable development practices,” Mr Fotiou told the Phuket Gazette.

“It depends on how things like waste and transportation are managed, and means that different locations have different requirements.”

“What I can see in the philosophy of His Majesty the King is the great idea that happiness doesn’t only come from money. We need to focus on being more responsible as individuals to make better decisions; to make sure that we are not looking to always consume more and more. And I believe this is a very big part of sustainable development,” said Mr Fotiou.

Later in the day, the chief adviser to The Nation’s editorial board, Suthichai Yoon, led a panel discussion titled ‘Perspective on Sustainable Development’. The panel members were Laliya Morshed, the executive director of the Yunus Center in Dhaka, Bangladesh; and Monica Sy from the Buddhist Compassion Relief Tzu Chi Foundation in Taiwan.

Woman upset with daughter jumps down a well