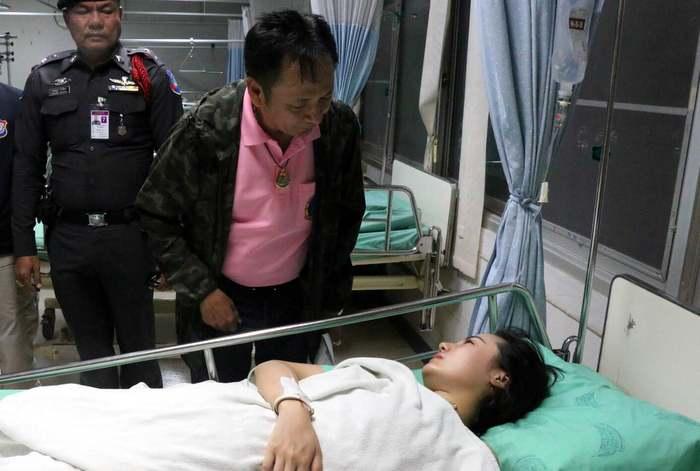 Phuket police said they are drug testing both captains, and will wait to press charges until they receive the results. Both boat operators blamed heavy rain for the incident.

Police identified the dead tourists as Liang Guanfu, 62, and Xu Tingting, 29, both Chinese nationals. Seven of the wounded tourists are still in Vachira Phuket Hospital, while the rest have been discharged.

Phang Nga and Phuket officials visited the victims in hospital yesterday, and confirmed that the tour companies will be held responsible for their hospital expenses.

“Both boats have insurance, so the companies will pay about 50,000 baht for injuries and about one million baht for the each of the deceased victims,” said Phuket Provincial Police Commander Teerapol Thipjaroen.

“Both operators said that they departed from Koh Kai and were headed to Maya Bay on Phi Phi island,” said Col Teerapol. “The two boats were moving parallel to each other, Chanakit on the left and Hongfah on the right,”

Police reported that about 15 minutes into the journey, the boats encountered very heavy rain. With visibility obscured, the Chanakit reportedly slowed down, which made it turn to starboard, following the direction of the wind. The Hongfah then collided with the Chanakit on her side.

“We expect to charge both captains,” Col Teerapol said. “However, we are checking witness testimonies and questioning some others.”

“There are more than 300,000 boats leaving Phuket’s shores every year,” Col Teerapol said. “These kinds of accidents rarely happen, but we’ve learned from this incident, and we are working to avoid tragedies like this one in the future.”

“Our officers have to check the health and condition of boat operators, their boat’s condition, make certain there are enough life jackets and that weather conditions are satisfactory before letting the boats leave the shore,” he added.