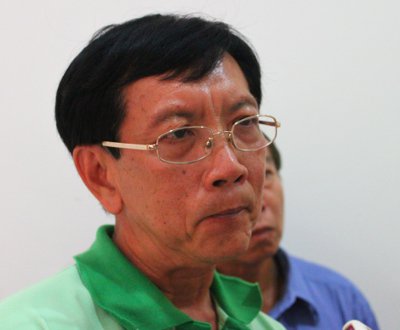 PHUKET: Lertsin Raksaskulwong, director of the Environmental Geology and Geohazard Bureau under the Department of Mineral Resources, yesterday called for the National Disaster Warning Center (NDWC) to revise its procedure for issuing tsunami warnings.

Speaking at a meeting at Provincial Hall held to review Phuket’s tsunami-response procedures, Mr Lertsin said, “The events of April 11 were chaos. It seemed they asked people to evacuate [tsunami-risk areas] immediately after announcing the earthquake.

“Actually, with any earthquakes more than 7.5 Richter [in magnitude], they need to clearly announce that the earthquake has happened before going to the next steps of announcing a tsunami watch alert and [if necessary] an evacuation order,” he added.

However, Mr Lertsin added that the NDWC was now aware of the problems encountered on April 11. “They are trying to fix their system.” he said.

“After the announcement [of the earthquake], many people started to evacuate beach areas. Crowded cars moved out of Patong and became stuck in traffic on the way up to the hills, such as the road on the hills hill between Surin and Kamala.

“Imagine if a tsunami came, many people trying to get to the top of the hills would die,” he said.

Speaking about the April 16 earthquake centered at Baan Bang Kham in Srisoonthorn, Thalang, and the ensuing aftershocks, Mr Lertsin urged people not to panic.

“If people feel tremors or an earthquake happening, the should follow safety instructions to protect themselves. They should evacuate to open areas or crouch under a table to make sure that things do not fall on them,” he said.

The geology expert dismissed rumors that an impending earthquake, predicted to strike on April 28, will “sink” Phuket.

“The base of the island is solid granite from hardened lava. It’s truly strong. So it is impossible for an earthquake to sink Phuket,” Mr Lertsin said.

Srisoonthorn Mayor Worawut Songyos said that more than 200 houses have been reported as damaged by the April 16 earthquake.

“We will examine all the houses to find out how much damage they have sustained and how much it will cost to fix them. We estimate it will cost from 5,000 to 20,000 baht for each house,” he said.