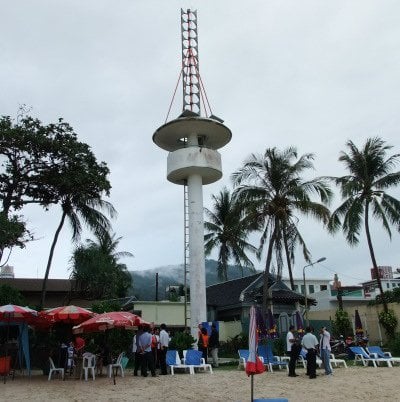 PHUKET: After two weeks of waiting for official requests to inspect tsunami warning towers that failed to sound the alarm on April 11, Chutichart Boonchuwit will bypass the bureaucratic hurdle and go ahead and have the towers tested anyway.

Mr Chutichart, who is the Information and Communication Technology (ICT) Ministry representative tasked with ensuring that the tsunami warning towers in Phuket are operational, told the Phuket Gazette today that he was notified on April 18 that six warning towers failed to sound the alarm.

“The Phuket office of Department of Disaster Prevention and Mitigation (DDPM-Phuket) informed me that tsunami warning towers at Kata Noi, Chalong, Nai Harn, Kamala, Patong and Ao Yon all failed to sound the alarm, or failed to function properly,” he said.

“On April 19, I inspected the towers at Patong and at Ao Yon. The tower at Patong worked well, but the tower at Ao Yon did not sound the alarm very loudly. I think it is because the tower is on a hill and might be too high for people to hear clearly,” he added.

As for the warning towers at the remaining locales – Kata Noi, Nai Harn, Chalong and Kamala – Mr Chutichart said he will no longer wait for confirmation from the local DDPM officers for those areas that the towers need to be tested.

“I will go ahead and make plans for them to be checked anyway. Actually, right now I am not sure exactly how many towers are working or not, so I will have all 19 tsunami warning towers in Phuket checked to make sure they are working,” he said.

In order to inspect the towers, Mr Chutichart needs to have a technician from the ICT Ministry headquarters in Bangkok present to try to determine the faults. Such a technician accompanied Mr Chutichart for inspecting the warning towers at Patong and Ao Yon.

“I have spoken with a specialist consultant at the ICT Ministry who will report this to senior ICT people so they can make arrangements for the towers to be tested,” he said.

As of today, Mr Chutichart, who is also the current director of the Phuket Statistical Office, said he did not know exactly when he would receive the go-ahead from the ICT Ministry.

“As as I do we will organize a team and check all the towers,” he said.