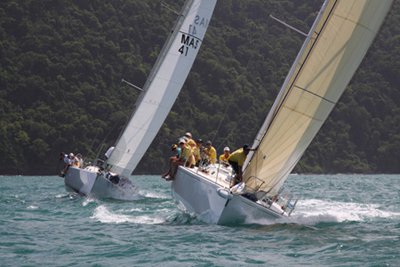 PHUKET: The best was saved for last as the final day of the 2012 Cape Panwa Hotel Phuket Raceweek saw 10-12 knots of breeze gusting to 15, and some spectacular competition around the southern islands of Phuket, which brought to an end an exciting and successful week.

Two races – a windward/leeward and an islands course – for all except the Classics was the decision by Race Officer Simon James for the Cape Panwa Hotel Race Day, and the fresh breeze delivered some great sailing, and surprises to the results table.

In the Sportsboats class, racing went down to the wire, the winner being decided on the final race. A first in Race 1 left the Phuket 8 Surf Patrol (Ray Waldron) in a strong position, however, on the longer course Race 2 they were beaten by the Welbourn 25 Brace! Brace!! Brace!!! (Paul Murphy), with its Dynamic Stability System. But that was not enough to knock them off the top spot and Surf Patrol won the series by two points with Brace! Brace!! Brace!!! in second and Longitude (Rolf Heemskerk) third.

Skandia Endeavour of Whitby (Stuart Williamson) and Phoenix (Niels Degenkolw) started the day tied on points with all to play for in IRC Racing II. However, surprises were yet to come. Skandia Endeavour of Whitby won the first race but placed fifth in the last race, letting Ruby Tuesday (John Vause) in with two second places today, enough to take the title by a single point. Phoenix were third overall.

Two points separated the top three in IRC Cruising going into the last two races today and all was set for a climatic encounter. A collision at the pin-end of the startline between Jenzminc VI (Andy Brennan) and Dreamtime (Rob Azzopardi) added to the intensity. Sail in Asia (Mike Downard) won line honors and the win on corrected time in Race 1, and held on to beat Remington (Jim Ellis) buy one minute on corrected time in Race 2 to win the series by two points. Remington were second overall and Dreamtime third.

In the Firefly One-Design class Voodoo (Hans Rahmann) had already wrapped up the title on Saturday with a masterclass of multihull sailing. They went on to score another first today to underscore their superiority. Moto Inzi (Roger Kingdon) scored a fourth place finish, and a first to come second overall with Twin Sharks (John Newnham) in third.

The Andaman Cabriolet catamaran DaVinci (Mark Pescott) had already won the Multihull Racing title yesterday with an unbeatable run of first places, and today continued their impressive form with two more wins, making it eight from eight. Add to that five from five at the Phuket Multihull Regatta one week ago and DaVinci are 13 races undefeated. The other Andaman Cabriolet design, Nina (Rob Cullen), finished second overall ahead of Sweet Chariot (Henry Kaye), who enjoyed today’s stronger winds, in third.

In the Classic class, the top two were tied on points and all could be lost (or gained) on the final race. McBob The Boat (Joe Gruba) threw away their chance by finishing fourth, leaving the door open for Sirius (Simon Morris) who won today and topped the series with 4 points.

34 entries and over 500 participants from around the world took part in the 2012 Phuket Raceweek. Final prizes were presented by at a lavish beachside party at the Cape Panwa Hotel.

For more information click here. The Phuket Gazette and PGTV are proud sponsors of the Cape Panwa Hotel Phuket Raceweek.

Early winners and tight racing on Day 3 of Raceweek