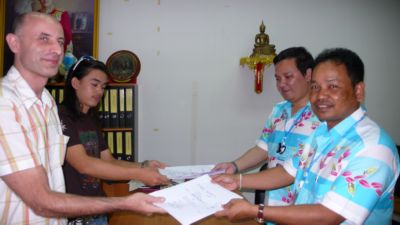 PHUKET CITY: After being told by Kathu Police last week that their forced eviction is not a police matter, long-term tenants of the Vises Hotel in Patong on Friday filed a complaint with the Phuket Consumer Protection Board at Provincial Hall.

The tenants were met by Prapan Chansaeng, who explained to them that by law a hotel can rent rooms only on a daily basis, despite the victims having been granted long term tenancy agreements.

K. Prapan said the Consumer Protection Board could do little to help them; however he would try to assist by putting on his other hat as head of the Phuket Office of the Damrongtham Foundation.

The Damrongtham Foundation provides legal aid to any person of any nationality that the foundation believes has been unfairly treated.

K. Prapan immediately prepared a complaint against the hotel, which was signed by Provincial Office Chief Rapeepat Na Nakorn and then by Vice-Governor Smit Palawatvichai on behalf of Governor Niran Kalayanamit.

The complaint has now been forwarded to the Provincial Attorney.

K. Prapan said that the management at Vises Hotel had created numerous problems over the years and that he would co-ordinate with both police and the Public Prosecutor to ensure that this latest problem is dealt with by the law.

Korean drowns while trying to save his wife