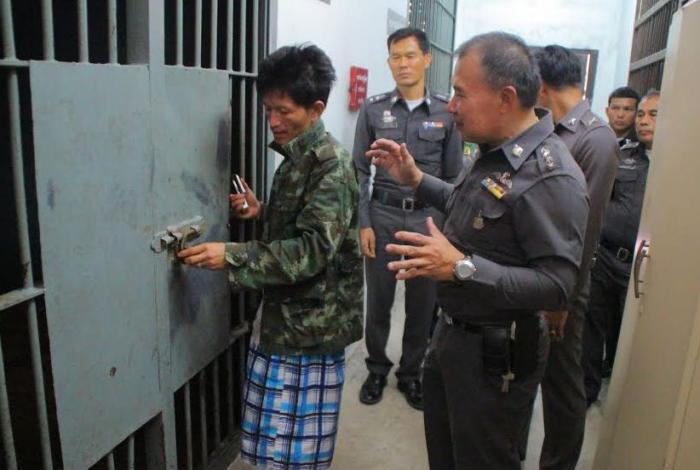 PHANG NGA: Phang Nga Police officials are planning to request the Royal Thai Police to improve the standard of nationwide prison locks after a prisoner used a three-inch metal wire to escape from Takuapa Police Station on Tuesday.

The runaway prisoner, named Panom Sirikul, 36, was recaptured yesterday, following which police made him demonstrate the lock-picking technique that reportedly took him less than 30 minutes to employ.

Mr Panom, a suspect in a theft and drug case, was detained in the station jail cell and managed to pick the lock when police officers went on a toilet break.

“We discovered that he disappeared from his cell about 5:30am. We immediately checked CCTV footage and followed his trail. The footage led us to Takuapa bus station, where we learnt that he had boarded a bus about 6:10am,” said Col Sarawuth Soongsanga of Takuapa Police.

“The driver of that bus told us that the suspect first requested to get off at Tung Maprao junction, but as he had no money, he was forced to disembark at Moo Baan Nam Kem – only about 10 kilometers away from the police station. When he got off, a group of teens came to receive him,” he added.

Mr Panom was finally arrested about 7am the next day, hiding in a 10-wheeled truck parked behind a palm plantation in Moo 4 Baan Thung Noi.

“We received reports that he had been seen in the area, so when we went there to check on him we finally apprehended him,” said Col Sarawuth.