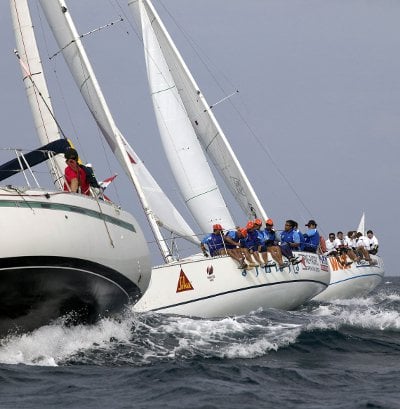 PHUKET: Almost 100 boats have already registered for this year’s Phuket King’s Cup Regatta, which will get underway off Kata Beach on December 4.

Inaugurated in 1987 to celebrate the 60th birthday of His Majesty the King of Thailand, the event attracts participants from around the world and generates in excess of 100 million baht into the local economy annually.

This will be the 24th staging of the King’s Cup Regatta and the event has received 97 entries to date.

This year’s Regatta will take place over eight days and boast over 100 boats in various categories.

The competition will culminate with the grand final on December 11, when the winner of the Royal Trophy will be crowned.

Last year was another record year for the Regatta, with 111 entries and participants from over 30 countries taking part.

The King’s Cup Regatta was voted ‘Asian Regatta Of The Year’ at the inaugural Asia Marine & Boating Awards this year, while Phuket itself scooped ‘Best Asian Maritime Capital’ at the 2010 Asia Boating Awards.

While the bigger yachts might make the headlines, the Regatta began life as an event with a strong dinghy presence back in 1987. The event will return to its roots this year with a new Optimist Class.

Earlier this year a grassroots initiative was established called the Phuket Dinghy Series. Started in September, this four series competition will conclude on the opening weekend of the Phuket King’s Cup Regatta. Children from all over Thailand will be taking part.

“The Phuket Dinghy Series is a grassroots initiative to help grow sailing as a sport amongst Thai youngsters in Phuket and around Thailand. At the last weekend event there were 17 children racing in Optimists, and we expect many more at the Phuket King’s Cup Regatta. Phuket has been a great host for the Regatta and we wanted to give something back to the local community in the form of a youth sailing competition,” added Kevin Whitcraft.

The Phuket Gazette is once again a proud sponsor of the Regatta.