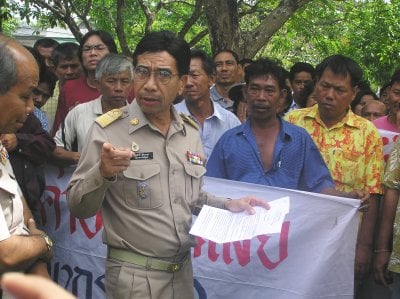 PHUKET CITY: Some 200 angry employers descended on Phuket Provincial Meeting Hall this morning, threatening to go on strike if their demands for an easing of rules on foreign laborers are not met.

* An amnesty allowing employers not to register laborers until a new government has been installed.

* A freeze on the compulsory 1,000-baht-per-laborer good behavior bond until Memoranda of Understanding that the Thaksin administration was in the process of completing with Myanmar, Laos and Cambodia have been signed.

* An end to arrests of employers and illegal laborers in cases where an extension to pay the registration fee has been granted by the Phuket Provincial Employment Services Office (PESO).

If these demands were not met, the petition stated, all employers who have signed the petition would suspend all work.

He added that employers with laborers whose permits to stay had expired will be fined 10,000 baht and will be charged 3,800 baht per worker to renew the permit.

However, K. Boonchock warned that, starting March 31, the full force of the law will be applied – illegal laborers will be deported, and employers caught hiring them will face a maximum of three years in jail and a fine of up to 60,000 baht per illegal laborer.

“The 1,000-baht good behavior bond was ineffective in controlling illegal laborers, so we have gone back to using the old law,” he said.

“Phuket has 23,000 registered foreign laborers, but about 50,000-60,000 illegal ones. It’s unbelievable that we have more illegals than Ranong Province,” added K. Boonchock, who was formerly Chief of the Ranong PESO.

Many of the protesters complained that people claiming to be government officials out of uniform had been fining employers, but that the employers could not determine whether the “officials” were genuine or not.

Gov Udomsak conceded this point and said that from now on only officials in uniform were to inspect workers’ camps and arrest illegal laborers.

However, he warned the employers, “You need to be more responsible about your employees. You know who they are – register them. There are a lot of illegal laborers [in Phuket], and the province needs to ensure that citizens are safe living among these people.”

K. Boonchock said, “You can’t ask the Governor not to enforce the law and not to arrest [those who contravene it]. But we may be able to help with some points.”

The Governor is to meet tomorrow with PESO officials, police and the Phuket Provincial Labor Office to discuss the employers’ third demand.

But it appears that, on the other two points, the government and the employers are still set on collision course.

“New’ reef bigger than any in the region