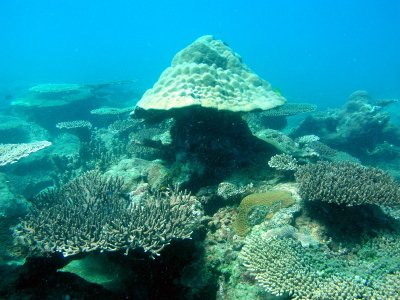 PHANG NGA: Marine scientists are still charting the extent of an uncharted reef off Tai Muang, Phang Nga, covering, they say, at least four square kilometers – far larger than any known reef in the region.

The discovery of the reef, made in the first week of January, was documented by Songpol Tippayawong, Head of the Thailand Marine and Coastal Conservation Unit (MCCU) of the WWF (formerly known as the World Wildlife Fund). The MCCU were surveying a reef nearby when they were tipped off by local fishermen.

“We never thought the reef would be so large,” said K. Songpol, who is a Phang Nga native. “I have never even seen a reef that is [even] one kilometer square in Thailand, and so far we have surveyed four square kilometers of this new reef. It is actually bigger; we have yet to survey the exact boundaries.”

Describing the reef, K. Songpol told the Gazette, “It was great – very big and healthy. It is in good condition and only about 1% of it was damaged by the tsunami.

“It is completely different from the [reefs at] the Similans, Surin or Richelieu – it is not sloping, and it is home to species never before seen in Thai waters as well as species [that before were] seen only in the Similans, such as a rare type of sweet lips.

“We also found one rock [formation] with over 20 lobsters in it. We named that site ‘lobster condo’,” he said.

Although the MCCU has yet to complete its assessment of the reef, the team has so far recorded more than 30 genera of hard corals and 112 species of fish from 56 families, including the parrot fish Chlorurus rakaura, which has never been seen in Thai waters before.

For now, K. Songpol is keeping the location of the reef a secret in order to protect it. “I’m not telling anyone exactly where it is,” he said, adding that the reef must first be surveyed, the coral’s condition assessed and the boundaries of the reef established.

“We believe it will have the capability to boost tourism in the area [but only] when there is a good management plan [in place]. We are in the middle of doing a field survey and we are collecting scientific data in order to zone the area and put down some mooring buoys.”

K. Songpol expressed concern that enforcement of environment conservation laws was lacking, which might jeopardize the reef. “There are a lot of good laws in Thailand. However, enforcement needs to be more effective. It’s manageable, but we have to get involvement from all state authorities and other interested parties.”

He explained that a management strategy was crucial to protecting the reef. The strategy should include raising awareness among local people, zoning and the reintroduction of some rare species of marine life, promoting tourism with participation from local villagers, and continual coral restoration. “We have already introduced 100 giant clams [at the new reef],” he said. – Sylvie Yaffe

Phuket gears up for April elections