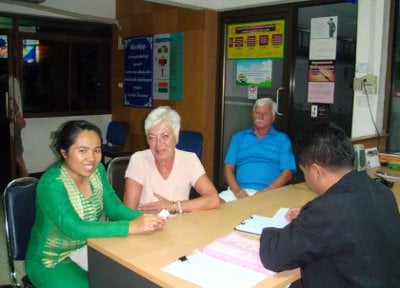 PHUKET: A Dutch tourist is out 5,000 baht and a mobile phone after her bag was snatched by a thief in Phuket yesterday.

Monika Van Rossum told Chalong Police the theft occurred in the early evening while she and her husband were walking near the PTT service station on Patak Road.

“We went out to have dinner. After that we felt like drinking coffee, so we went looking for a coffee shop,” said Mrs Van Rossum, 66.

The couple were on Patak Road, about 300 meters from the PTT station, when they noticed a man and a woman on a motorbike stop nearby.

“The woman riding pillion got off the bike, ran toward me and snatched the purse from me. Then she ran back to the bike and they both rode away,” she said.

“When I returned to the hotel, I informed them and they took me to Chalong Police Station,” she added.

The Van Rossums, who arrived in Phuket on January 26, are booked at the Marina Phuket Resort until March 1.

Mr Van Rossum was surprisingly upbeat given the turn of events, describing it as “just a bit of bad luck”.

“We have been coming here for more than 12 years. This kind of thing has never happened to me before…I was quite shocked by the incident, but we will be coming back to Phuket again. We just had some bad luck,” said Mrs Van Rossum.

“The reason I come back here is because I’m in love with the beauty of Phuket and the hotel where I always stay. Also we both have many friends who live in Phuket. It’s nice to come visit them,” she added.