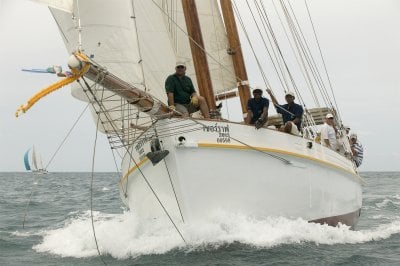 Duncanson, aboard the Phuket 8 Somtam Express in the sportsboat racing class, is ahead of another Phuket 8, Josh Lee’s Lee Marine Vino, with Wade Lewis’ Team Simpson Marine – with a combination of New Zealanders and Hong Kong residents as crew – third overall.

Conditions were almost perfect for sailing yesterday. There was light rain and light breezes just before the start, but once the gun was fired the skies cleared, the sun appeared and the wind lifted to about 14 knots on average.

Some of the closest racing seen yesterday was among the big keelboats in the IRC1 class. David Lindahl’s La Samudra and John Vause’s Ruby Tuesday fought neck and neck around the course during both the races held for their class today before Lindahl came out on top.

After four races, La Samudra leads the overall standings in the class with three first places and one second, while Ruby Tuesday is second overall after one first place and three seconds.

Keith Garry has been a model of consistency on his boat Beaux Esprits, with four third places from the four races held so far in the IRC1 class.

Last year’s winner of the IRC2 class, Mick Kealy on Minx, is on track to take the honours again this year after two firsts and two second places for the overall lead.

But hot on his heels is Cinders, skippered by Stuart Crowe, who has two first places, a second and a fourth. Jim Kane on Chetak is third overall in the class.

The fastest sailing boats in Thai waters at the moment are the Firefly catamarans. Designed and built in Phuket, two of the slick felines are contesting the multihull racing class at Raceweek this year.

Marc Cuddenec’s Chi Machine, launched just a few days before the start of the regatta, is making a great racing debut and has won three of the four races in its class so far. But breathing down its neck is another of the lightning-quick Fireflys, Moto Inzi, which is second overall in the class after one first place and three seconds.

John Stall’s Charro has been left in the wake of the two Fireflys, but has still managed a very creditable third place in every race so far, to hold third place overall.

The bigger, heavier catamarans sailing in the multihull performance cruising class are led overall by Chris Runnegar on Chameleon, followed by Bob Mott on Kilo and Jerome Perignon on Aliocha.

Probably the most photographed boats taking part in Race Week are the Classics. Leading this class overall is Gunther Nutt’s Kerida, which has finished first on handicap in both races contested so far.

Tom Howards’ Seraph, which is celebrating its 100th birthday this week, is second overall after finishing fourth and second on handicap in the first two races, followed by Julian Hill’s Sanook.