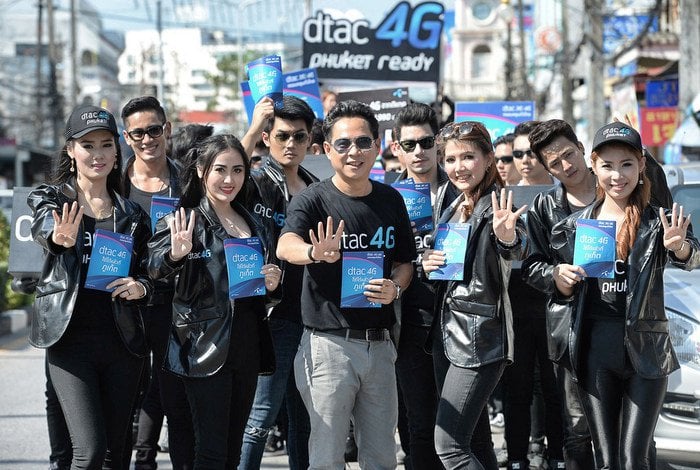 Phuket is the first southern province to receive 4G service, after dtac launched in Bangkok.

“In 2014, internet usage in Phuket [grew] by 150% compared to the previous year. The top five favorite applications used in the area are Facebook, Google Video, YouTube, LINE and Instagram,” Panya Vechbanyongratana, dtac senior vice president, said in a statement to the press.

Dtac, the second largest global system for mobile communication (GSM), plans to install more than 6,500 base stations for 3G and 4G services to cover all areas in Bangkok and the vicinity, as well as in 30 other provinces nationwide.

In line with a slew of promotional deals, including the “Happy Tourist” 4G service SIM, dtac aims to be the number one 4G SIM card provider for foreign tourists in Thailand, the statement read.

“Phuket, the Pearl of the Andaman, is a famous tourist attraction of Thailand. It is admired by Thai and foreign tourists worldwide due to the outstanding natural [landscape], sublime beaches and rich culture,” the dtac statement said.

“According to a report from Kasikorn Research Center, there were approximately 13 million Thai and international tourists visiting Phuket in 2014. The number is up by 8.7 per cent from the previous year.”

Dtac 4G service on the island will be available in all three districts, with coverage including “tourist attractions, key seaside, business areas and residential areas.”

“We will continue the 4G service expansion to Had Yai, Surat Thani, Koh Samui and so on, as we see the potential of internet usage growth in the areas,” Mr Panya said.

“Let’s start with the basics. While ‘3G’ was a marketing term that could mean anything to anybody, that’s changed. Almost everywhere in the world now, ‘4G’ has a very specific technical meaning. It uses a technology known as LTE. Depending on how you define ‘3G’, 4G transmissions run ten to fifty times faster than 3G,” explained Phuket Gazette technology columnist “Mr Live Wire” in December 2013.

“That’s a very significant improvement – so significant that it’s entirely possible 4G will one day replace ADSL land lines as the internet delivery mechanism of choice, much as mobile phones replaced land phones a decade or two ago.”

“First, while the LTE communication protocol – the way your phone or tablet talks to the tower – may be very fast indeed, it doesn’t mean squat once the signal’s at the bottom of the tower. Parts of the US now are seeing massive collision problems with the wireless part of the 4G equation: too many people have 4G phones, and they’re using them for all sorts of data-intensive stuff, slowing down communication between the tower and the phone. Phuket may eventually see that problem too.

“But for now, the big problem in Phuket is how fast the internet connection goes from the base of the tower to wherever you’re trying to reach. In technical terms, that’s called the ‘backhaul bandwidth’.

“Right now, your ‘unlimited’ 3G data plan isn’t unlimited at all. Depending on how much you pay, you can run 2 GB (the size of a high definition movie) to 4 GB (two movies) through your 3G connection every month.

“After you hit the cap, your service is throttled back to 2G levels – roughly 380 Kbps or less – until the next month’s billing cycle starts. As long as you’re playing a few YouTube videos and downloading email, you won’t hit the cap. But if you’re streaming movies, the cap’s going to get you big time.”

For more about 4G from Mr Live Wire (click here).