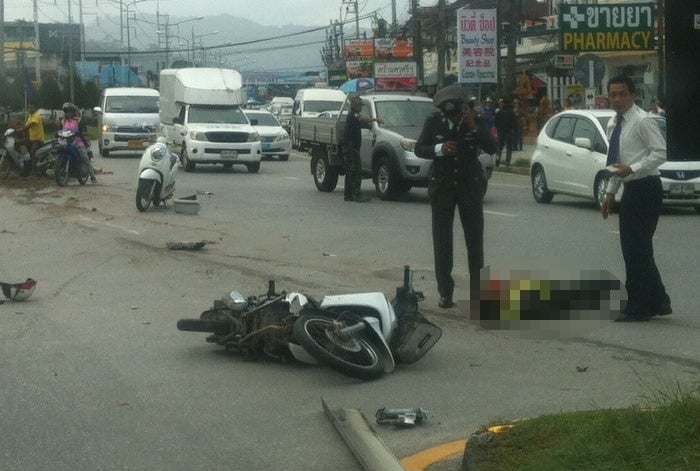 PHUKET: A drunk minivan driver killed a Phuket police officer after jumping the curb and running over him at a u-turn near Phuket International Airport this morning.

Sen Sgt Maj Suthat Songmuang of the Tah Chat Chai Police was on duty at the time and preparing for his role as part of the security team for the visit of HRH Princess Maha Chakri Sirindhorn, who is on the island to officially open the medical education center at Vachira Phuket Hospital, as well as the ‘Baan Khun Poom Building’ for children.

Sen Sgt Maj Suthat was rushed to Thalang Hospital, but died of his injuries while being treated, confirmed Phuket Provincial Police Deputy Commander Saman Chainarong, who was present at the time of the accident.

The 25-year-old minivan driver, Pichitpol Pakkaew, had a blood alcohol content level of .076* per cent. The legal limit is .05 per cent, explained Col Saman.

“The accident was clearly captured on CCTV. Mr Pichitpol was taken to Tah Chat Chai Police Station to be charged with reckless driving causing death, as well as driving under the influence,” Col Saman said. “We are deeply sorry for the loss of Sen Sgt Maj Suthat. We will do our best to take care of his family.”

The death comes on the heels of last week’s issuance by Phuket Provincial Police Commander Teeraphol Thipjaroen of drunk driving arrest quotas to police stations on the island. However, the Tah Chat Chai Police, whose jurisdiction Sen Sgt Maj Suthat was killed in, did not have a quota (story here).

At the end of August, Michael Woodford, executive chairman of the Safer Roads Foundation (SRF), and his wife Anunciacion Somavilla gifted the province 39 breathalyzers to help police crack down on drunk driving (story here).

*The original article stated that the van driver’s blood alcohol content level was .067.

Participants lining up for next year’s Raceweek