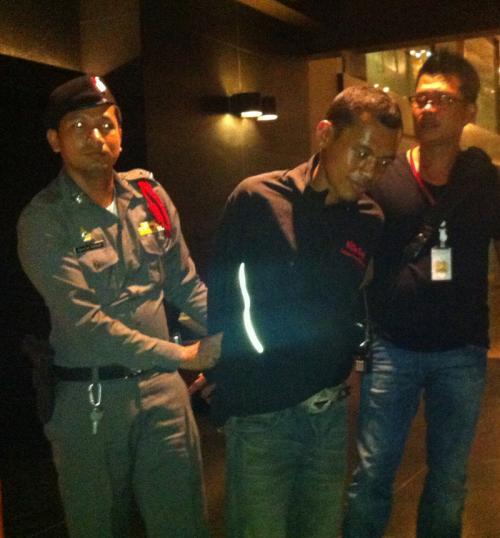 PHUKET: A Patong Deputy Superintendent was caught with his pants down in Kathu Police Station during the graveyard shift after a meth-fiend robbed his office as he was taking a 20 minute break in the washroom.

“When I returned from the toilet, I found my property had been stolen,” said Patong Police Deputy Superintendent Paisarn Sangthep.

The confessed culprit, Banpot “Pot” Srina, 24, was tracked down after a motorbike taxi driver claimed that the suspect had hijacked his motorbike and demanded to be taken to the McDonald’s on Patong’s beachfront road.

“He threatened the driver with the gun and forced the driver to take him to the McDonald’s. He claimed he wanted to meet a friend there – he did not pay for the taxi,” Lt Col Nikorn said.

Police found Mr Banpot standing on the side of the road in front of the McDonald’s with the gun in his hand. All items stolen from Lt Col Paisarn’s office, valued at over 100,000 baht, were recovered.