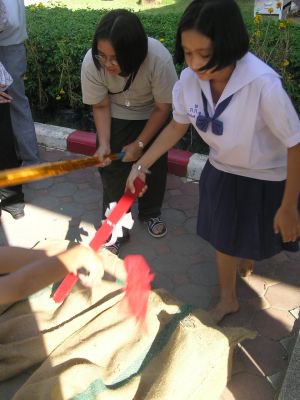 PHUKET CITY: In a scene reminiscent of the US in the 1920s, some 100 people turned out this morning to burn cartons of cigarettes and smash bottles of alcohol. The “No tobacco, no alcohol for a better life” project was organized by the Kalyanamitra Organization, Phuket, along with Rajabhat University Phuket, where the bottle-smashing was staged. The message of the event was aimed especially at children, coordinator Pawinee Jularat told the Gazette. She said that it would assist the government’s policy of eliminating social evils. “We burned five cartons of cigarettes and destroyed about 50 bottles of alcohol brought by people who attended today,” she explained. “We are campaigning for people to stop drinking alcohol and to quit smoking.” She said she expected the project to gather momentum, with more people getting involved, possibly climaxing with the entire province joining in. The guest speaker at the bottle-smashing was Phra Tawalsak Yattisakko, from Bangkok’s Wat Phra Dhamakaya, who said that projects with similar aims had begun in many provinces, including Bangkok. “Alcohol and tobacco are on display in many shops, even though they are not good for people, especially children, and may lead to them taking other drugs,” he said. The Kalyanamitra Organization, which cooperates with the Dhamakaya Foundation, was set up in Phuket about five years ago. It has about 100 members committed to projects “aimed at improving people’s lives”.