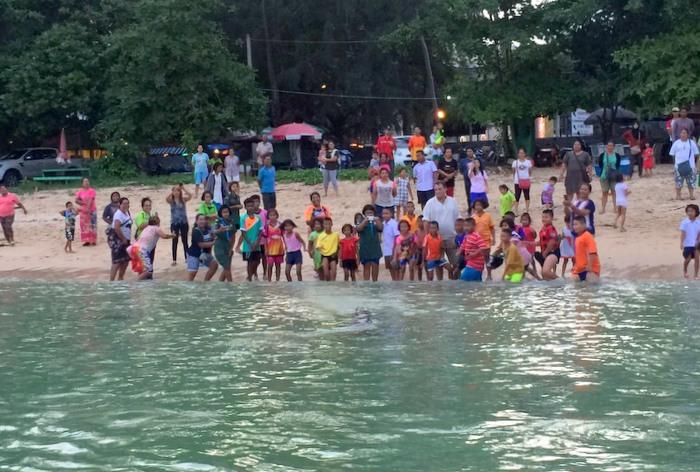 PHUKET: A lost and weakened dolphin found at Rawai beach last night has died, despite rescuers attempts save the mammal.

Rawai Mayor Aroon Solos told the Phuket Gazette that he received a report around 5pm from locals that they had found a dolphin in trouble off Rawai beach.

Mayor Aroon said that while they were waiting for officer from PMBC, the dolphin was washed onto the shore by a strong wave. Locals and the mayor worked together to get the dolphin back into the sea.

“By the time they had arrived, a crowd of people had gathered, standing around the beach and watching. The dolphin was about 20 to 30 meters away from shore,” he added.

“She couldn’t swim, so we had to help hold her in the water while waiting,” Mr Aroon said.

The dolphin was female, weighed about 80 kilograms, and apparently had suffered injuries to its mouth. The dolphin died while being transferred to the PMBC,

“PMCB officers will examine the body to find out what exactly happened to the dolphin, but initially believe that she was sick and was too weakened to fight with the strong currents,” Mayor Aroon said.