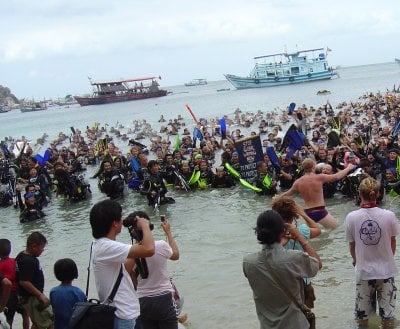 SURAT THANI: More than 720 people from at least 35 countries have set a world record for the most divers diving simultaneously off Koh Tao, as part of the Koh Tao Underwater Day festival.

The event was held to promote awareness of how global climate change is slowly killing coral and to mark the coming into effect today of the Kyoto Protocol, an international treaty signed by 136 nations, and aimed at reducing the amount of carbon dioxide produced globally. Carbon dioxide is one of the greenhouse gasses that produce globl warming.

Paul Foley, a consultant to the event’s organizer, Koh Tao Dive Operators’ Club, said, “We have chosen to focus upon climate change – more often called global warming … with current trends, there may be no coral left in 20 years.

“The glaciers and icecaps are melting. The time for action from policymakers and consumers is long overdue. We need change now.”

Rico Stapel, of nearby Koh Samui’s community magazine told the Gazette that thousands turned out for the event, which also included a Miss Dive Shop contest, a longtail boat race and a naval exercise by the Royal Thai Navy.