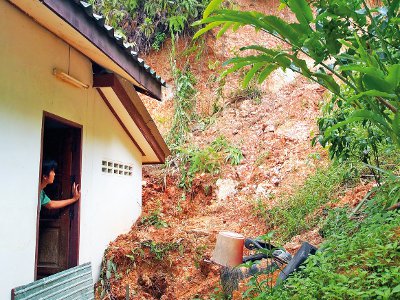 PHUKET: Insurance coverage for homes and businesses damaged by natural disasters, including floods, storms, landslides, earthquakes and even tumbling boulders is now available in Phuket and the rest of Thailand again following the government’s creation of the National Catastrophe Insurance Fund (NCIF).

The fund, launched on March 28 with a government budget of 5 billion baht, offers coverage through a unified National Disaster Insurance Policy recognized by 54 registered insurance companies operating in the country.

The government’s move to create the fund comes in the wake of the devastating floods in October last year, after which all insurance companies in Thailand stopped issuing insurance policies to cover natural disasters.

“The premiums were simply far too high for anyone to want to take out a policy, so they stopped offering them,” Ms Suwimon explained.

“This is why the government along with the private sector have developed the National Catastrophe Insurance Fund,” said Prime Minister Yingluck Shinawatra on March 28, the day plans were made available to the public.

The NCIF policies now available are the only policies in Thailand that offer insurance coverage against natural disasters, said Ms Suwimon.

However, the new policies are limited and come with a slew of preconditions that must be met before insurance companies will be obliged to pay out, she added.

The insurance coverage now available was being offered through “sublimit” policies, which set a maximum payout for claims made, she explained.

Homeowners covered under the scheme have only one policy available covering up to 100,000 baht damage at a cost of 500 baht a year, Ms Suwimon said.

Depending on the insurance company involved, small to medium-sized enterprises (SMEs) can take out multiple packages of up to 50 million baht at an annual premium of one per cent of their policy coverage.

“However, right now it seems insurance companies are willing to offer businesses full coverage for some natural disasters, but only limited payouts for flood damage,” Ms Suwimon said.

Another condition is that the NCIF policy can be obtained only as an add-on to one of two primary insurance policies, either Fire Insurance or an Industrial All Risks policy, Ms Suwimon explained.

“This type of disaster insurance is designed to cover only major disasters that cause massive amounts of damage and affect many people. The natural disaster area will be determined by the Department of Disaster Prevention and Mitigation.

“If an event isn’t declared a natural disaster by the DDPM, people will not be able to file claims under the NCIF policy,” said Ms Suwimon.

Following the damage to houses in Srisoonthorn after the 4.3 earthquake struck in Thalang last week, an officer at the NCIF contact center told the Gazette that damage caused by earthquakes of 7 Richters or greater in magnitude were automatically covered by the NCIF policies.

The damage caused by the quakes in Thalang on Monday would have been covered by the NCIF insurance plan, despite the quake being less than 7 Richters in strength because the DDPM declared the area a disaster zone, she said.

For details about the NCIF visit www.ncif.or.th