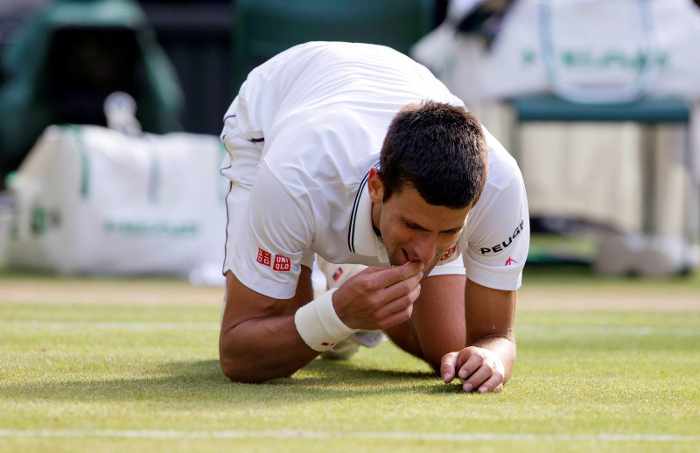 AFTER almost four hours of mental torture, Novak Djokovic sank to his knees, crouched over the hallowed Wimbledon turf, plucked a blade of grass and put it in his mouth – never before had victory tasted so good.

At 6.07pm local time on Sunday, Djokovic’s agony finally turned into ecstasy when Roger Federer whipped a backhand into the net to end one of the greatest finals seen at the All England Club and to elevate Djokovic to a double Wimbledon champion with a 6-7(7) 6-4 7-6(4) 5-7 6-4 victory.

Fifty two minutes earlier the Serb had also stood one point away from victory at 5-4 in the fourth set – only to watch Hawkeye deliver the cruelest of blows.

The technology that had left Federer seething in the 2007 final, when he yelled “God it’s killing me”, came to his rescue at match point down by ruling the Swiss’s serve had in fact kissed the line after the line judge had called it out.

What should have led to a second serve from Federer had now turned into an ace, producing another twist in the drama that had 15,000 people sitting on the edge of their seats and Djokovic tied up in knots.

“This win has a special importance to me mentally. Because I managed to not just win against my opponent but win against myself as well and find that inner strength that got me the trophy today,” said an emotional Djokovic, who had lost five of his previous six grand slam finals.

“I could have easily lost my concentration in the fifth and just handed him the win.

“I needed this win a lot,” added Djokovic, whose Wednesday wedding with long-time girlfriend Jelena Ristic, has now turned into a double celebration.

The triumph handed Djokovic a seventh grand slam title – surpassing the total won by his coach Boris Becker – and halted Federer’s bid to become the oldest men’s champion at the All England Club for more than half a century.

“It was a great final. I can’t believe I made it to five, it wasn’t looking good for a while,” the 32-year-old Federer said after missing out on an 18th grand slam title.

“I thought it had everything for fans to like.

“The swing of momentum in the first set, him coming back in the second, staying even in the third, all the back and forth in the fourth set … when things got a bit crazy, and then the drama of the fifth.

“I kept believing… and kept trying to play offensive tennis, I’m very disappointed not being rewarded with victory. I was very sad walking off the court not with the winner’s trophy.

“I already have seven. It’s not like I need another one. But it would have been awfully nice to have it,” added the Swiss, who was consoled by Prince William and his wife the Duchess of Cambridge after walking off court a beaten man.

It was a contest in which Federer fired down 29 screaming aces, including four in one game, produced 75 winners, and won 180 points in total – just six fewer than the champion.

While Federer was disappointed at coming off second best in another five-set final thriller, six years after being beaten by Rafael Nadal in what is dubbed the ‘greatest match ever’, losing was not even an option for Djokovic.

It was therefore little surprise that the man whose tennis had been rather wayward this past fortnight, brought out the heavy artillery on Sunday.

From the off, 20-shot rallies were followed by 22-stroke exchanges as the two gladiators went toe-to-toe, both showing astonishing levels of athleticism as they chased down anything the other threw at them.

“This has been the best quality grand slam final that I’ve ever been part of. Quality-wise from the first to last point, this is definitely the best match,” said Djokovic.

The absence of break points in the first set led the battling duo into a tiebreak, Djokovic carving out the first set point at 6-5 only to see it vanish seconds later when he hit a forehand wide.

Four points later Federer had his usually unflappable coach, Stefan Edberg, leaping to his feat and shouting “Yes” and “C’mon” from the front row of the player’s box when his charge nabbed the first set thanks to a Djokovic backhand error.

With the showdown also billed as the ‘battle of the super-coaches’, Edberg having beaten Becker in two of the three Wimbledon finals they had contested from 1988 to 1990, the clearly agitated German slumped back into his seat.

At the same time the hollering crowd rose to salute the man many call “a tennis god”, the Serb looked up to the heavens, holding his racket grip between pressed palms, praying for some divine intervention.

He did not need any help from outside forces when he broke Federer, who had won 99 percent of his service games during his run to the final, for a 2-1 second-set lead with a blazing crosscourt passing shot.

That was enough to give the top seed the set and when he took the third 7-4 in the tiebreak, it seemed there would be no way back for the crowd favorite.

But Federer loves the feeling of ball on racket, he loves creating magic – and that is exactly what his aging limbs and battle-weary mind produced in the fourth set when he stormed back from 5-2 down, saved match point, thanked Hawkeye, and left Djokovic stunned and deflated.

The cheering crowd wanted more, Djokovic did not.

Holding his arms wide and he gestured skywards, perhaps questioning: “what do I have to do to beat this man?”

After Federer saved three nerve-jangling break points in the eighth game, Djokovic’s prayers were finally and thankfully answered two games later at 6.07 pm, allowing him to enjoy “a nice bite” of grass.

“I thought that there was less grass today than it was a few years ago, so I had a little bit of soil, as well. It tastes like the best meal that I ever had in my life.”