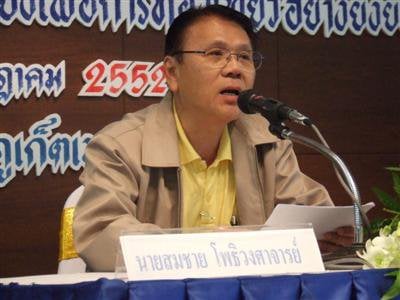 PHUKET CITY: The agency pushing to develop the Ao Phuket mega-project off Saphan Hin has finished holding public hearings and says it has overwhelming support for listing all of Phuket as a special administrative zone for sustainable tourism development.

Designated Areas for Sustainable Tourism Administration (Dasta) held the first in a series of public hearings with representatives from Phuket’s Muang, Thalang and Kathu districts at the Royal Phuket City Hotel on June 30.

The hearings concluded on July 29 with a meeting at the Amora Beach Resort in Cherng Talay for representatives of the Phuket Provincial Administration Organization, as well as the administration organizations of tambons Pa Khlok and Srisoonthorn, and other local leaders.

Going into the final hearing, Sathit Leungjaroenlab, managing director of consulting firm Phisut Technology Company, said that overall about 90 per cent of all those who voted at the hearings agreed to list their communities under Dasta.

Phisut Technology was retained by Dasta to help with the public hearing process.

Of those who did not vote in favor of Dasta listing, some had simply abstained. There was little strong opposition, he said.

With such overwhelming approval, Phuket Governor Wichai Phraisa-ngop is now expected to send a letter to the Dasta board in Bangkok formally requesting that the entire province be listed under Dasta.

Cabinet approval could come in about three months time.

The Dasta executive board will meet on September 5 and 13 to establish subcommittees to prepare to have Phuket come under the agency’s purview.

Two areas in Thailand are currently listed under Dasta: Koh Chang in Trat province and the Chiang Mai Night Safari.

Pattaya is also in the process of becoming listed.

Tribunyat Jariyalerpong, president of the Thalang Cultural Village at Ban Khanaen, told the Gazette that public reaction to Dasta listing was strongly positive because people understand the agency will fast-track good projects without the need to pass through all of Thailand’s normal, and onerous, bureaucratic steps.

“After Phuket is listed as a sustainable tourism area I would love to see the problem of the land rights issues addressed, because about 60 per cent of the land on the island is currently owned by foreigners.

“It is a frightening situation that will only get worse unless it is addressed. Before long we might see landless local people having to rent places to live in from foreigners,” Mr Tribunyat said.

The Dasta board was last in Phuket in May last year, when the government of then Prime Minister Samak Sundaravej gave the agency the green light to develop a 100-billion-baht mega-project in Phuket Bay.

Dasta is still keen to push forward with that project, which would finally give the island a world-class convention center.

The project would also remove a layer of mud and tin mining dregs covering 10,000 rai of Phuket Bay and restore the bay’s natural sandy bed, Dasta board member Rajatin Syamananda told the Gazette.