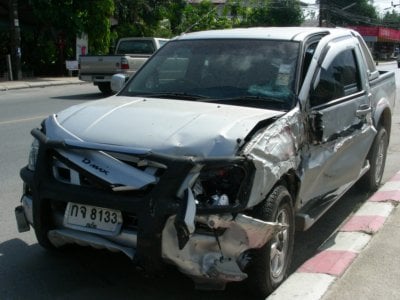 CHALONG: Lars Anders Olov Persson, 45, from Denmark, has been released on bail after being charged with auto theft, reckless driving and destruction of government and private property caused during a road rampage in a stolen a pickup truck last Wednesday morning.

Persson hit more than a dozen motorcycles, a number of pedestrians and caused extensive damage to other vehicles.

He was finally caught after ramming a fire truck being used as a roadblock.

Pol Lt Col Pheerapan Meemak of Chalong Police Station told the Gazette that police received a report that a silver Isuzu D-MAX had been stolen from in front of Pae Leng restaurant at 11:20 am.

Col Pheerapan stationed police at key traffic locations in the area to catch the thief.

Persson was spotted by police as he sped past them as he turned from Wiset Rd onto Saiyuan Rd in Rawai.

On Soi Yanui, he hit six parked motorcycles and clipped 68-year-old Prasert Tamchu, then went on to hit two more motorbikes and an SMI Travel minivan parked by the side of the road.

Persson then proceeded to Kata Viewpoint, hitting four more parked motorcycles and five villagers along the way. None of the victims were seriously injured.

He then sped on to Kata Noi, racking up four more motorbikes en route.

By that time police had commandeered a fire engine from Karon Municipality and used it to block the intersection at the bottom of the hill at the Orchidacea Resort.

Undeterred, Persson rammed the D-MAX into the truck at speed, bursting its right front tire in the process.

Despite several bloody wounds, he then leaped from the truck and attempted to flee on foot, but was apprehended by police officers, Col Pheeraphan said.

Persson was taken to Chalong Police Station where he was charged and held until his recent release on bail.

Col Pheeraphan added that earlier in the week, Chalong Police had had to intercede in a fracas at a beer bar in Karon in which Mr Persson was involved.

A date has yet to be set for Person’s appearance in court.