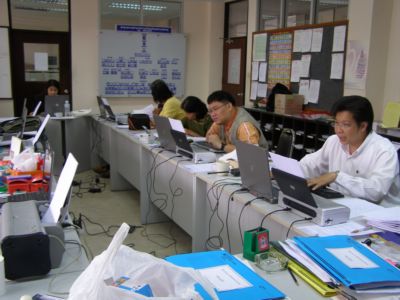 PHUKET: The Department of Special Investigation (DSI) has set up a desk at Phuket City Police Station to accept complaints from victims of an “investment company” thought to have defrauded some 5,000 southerners of more than 150 million baht.

Thanin Prempri, head of the DSI Phuket investigation team, told the Gazette that Amorn-ake Petluechai and two associates of his Khon Kaen-based Thaninanan Co Ltd were in early March charged with multiple counts of conspiracy to commit fraud and sent to a Bangkok jail without possibility of parole.

The arrests followed a DSI investigation after numerous complaints that the company had promised 6% to 8% monthly interest payments to people investing in its “rubber share” fund.

A search of the company’s offices uncovered a list of 712 people who invested 217,540,500 baht in the scheme. Most were from Krabi, Phuket, Trang and Nakhon Sri Thammarat.

The DSI estimates that some 5,000 investors fell for the scheme nationwide, suffering total losses of more 150 million baht.

Fifty cases have already been filed against the company in Khon Kaen court and many more are expected.

A complaint desk set up in Krabi last month has already accepted complaints from 959 victims who invested a total of 166.8 million baht and reported losses of 94.5 million baht, he said.

“The Phuket complaint desk we set up on May 9 has already had more than 70 victims come forward to report losses of 13 million baht,” he said.

The desk will continue to accept complaints until May 22.