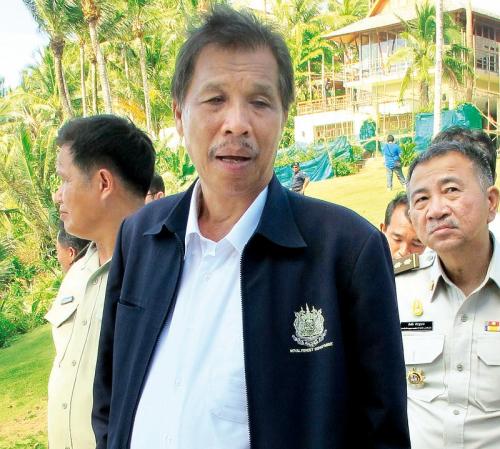 Acting on a complaint from The Department of National Parks, Wildlife and Plant Conservation (DNP), whose own investigation seemed to ground to a halt last year when an expected 366 investigators from Bangkok failed to arrive, the DSI has taken the reigns.

“I believe DSI will make the work flow faster because they have more authority to check for the details and documents than DNP has and they can take direct action against illegal activity because they are more independent,” Sirinat Marine National Park chief Cheewapap Cheewatham told the Phuket Gazette.

Where appropriate, the DSI will be using the newly revised Anti-Money Laundering Law to prosecute cases, explained Prawuth Wongsinil, chief of the DSI Consumer and Environment Protection Office.

“The new law will be used to press charges of selling, changing or transferring protected natural resources, environment or any country property,” Lt Col Prawuth said.

The law requires certain businesses, such as gold dealers, car rental agencies, antique dealers and, critically, land brokers, to file detailed reports with the Ministry of Finance every time they make a transaction above a set baht amount, to be determined by the ministry.

“Suspicious land title deeds have been issued for 3,000 rai of the 60,000 rai national park. These land title deeds were then sold to groups of foreign investors to build 14 hotels and resorts,” Lt Col Prawuth told the Gazette.

“We have also found investors queued up to apply for suspicious land title deeds for about 360 plots of land in the national park,” he added.

The DNP stopped issuing Chanote titles for land in the park area after 1964, and any land that has a Chanote issued after 1964 is to be considered illegally owned, explained the former head of the DNP, Damrong Phidet, in August.

“Our investigation process will be strong and fair,” Lt Col Prawuth said. “We will investigate those who are really involved in the process of issuing illegal land documents. Some of these land documents have passed through many hands. Investors who just bought the land might not know the background of the land titles, so we cannot press charges against them – we have to be fair to them,” he said.

“We are examining the details of the park land and the resorts and hotels that were suspected of encroaching on the park. After that we will send the information to the Anti-Money Laundering Office (AMLO) to check if there are any money laundering charges that can be levied,” he said.

To help investors determine whether or not land they are considering purchasing may be legally sold, the DNP has developed a program called “DSI Map”, which provides an IT database with satellite images and aerial photographs of Thailand, explained Lt Col Prawuth.

“The program shows the national park and national protected forest borders,” he said.

“The program is only in Thai, but we hope to have an English version available soon,” he added.

The current interactive map can be found at www.dsi-map.go.th.