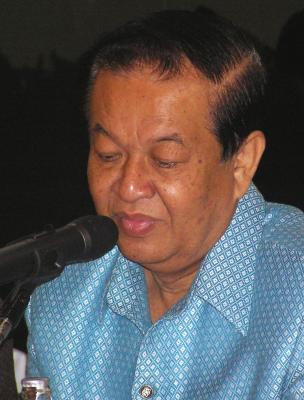 PHUKET: Deputy Prime Minister Wan Muhamad Nor Matha yesterday warned employers of illegal foreign laborers from Burma, Laos or Cambodia that they have until Saturday to register their illegal foreign employees, or face a fine of up to 100,000 baht or up to 10 years in jail, or both.

The warning came at a meeting at the Pearl Village Hotel at Nai Yang, chaired by Deputy PM Wan Nor and attended by Labor Minister Uraiwan Thienthong and other top officials, including the Governors of 10 southern provinces.

A Ministry of Labor press release explained that Phuket had been chosen as the venue for the high-powered meeting because of its reputation for having a large number of “neighbor laborers”.

There are currently 15,761 registered Burmese, Laotian and Cambodian workers in Phuket, but the Labor Office estimates that there are 70,000 illegal “neighbor labor” workers on the island.

Special centers with Labor Office and Immigration officers have been set up at each of Phuket’s three District Offices and at Phuket City Hall to process the registration of foreign laborers.

These centers, Deputy PM Wan Nor said, must stay open until 4:30 pm on Saturday to process registrations. “They must be open for foreign laborers to be registered even though it is a government office day off,” he said.

Employers who are unable to bring their neighbor laborers along before the deadline, he explained, may register their foreign workers’ names in their absence. The laborers can then register in person later. No deadline was specified for this.

Deputy PM Wan Nor also warned that, after Saturday, task force teams comprising police and immigration officers, as well as officials from the Labor Office, the Department of Employment and the Governor’s Office, will launch raids on employers to check if they are using any illegal “neighbor” labor.

In a move aimed at inspiring an effective campaign to round up illegals, teh Deputy PM also announced that he will propose to Cabinet a reward scheme funded by the fines levied on employers found guilty of hiring illegal laborers.

He explained that 80% of the reward would go to the informer, who could be a state official, with the remainder shared between the police and any government agencies involved in the arrest.

“This is the first time the government has considered paying rewards to state agencies for following policy,” said the Deputy PM. “I hope that this will not be a problem because I and [Labor Minister] K. Uraiwan agree with this concept,” he said.