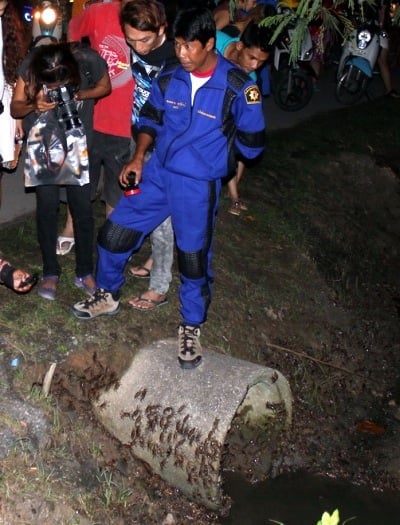 PHUKET: Phuket Town residents received a shock yesterday as they witnessed an invading army of crabs marching through the streets in the direction of the nearby mangrove forest and sea.

Fortunately, the rare phenomenon was not an alien invasion by the crab-men from outer space.

The totally natural event, which occurred at about 7pm, involved thousands of mangrove crabs making the journey along Sakdidet Road Soi 1, opposite the Phuket Mangrove Development Station, to lay their eggs amongst the mangroves.

The mangrove crabs, also known by locals as Pu Preaw (sour crab), were marching along the ditch by the side of Sakdidet Road, many crossing the street, but all heading in the same direction: toward the mangrove forest.

Some people stopped their cars to watch the spectacle, many said they had never seen anything like it.

A few thought that the temperature underground might have climbed to the point where the crabs decided to move out. Others thought that poor water quality was to blame for the mass migration.

Some people believed it was an omen of an impending disaster, such as an earthquake or tsunami.

The voice of reason came in the form of Surachat Chalarat, who heads the Phuket Mangrove Development Station.

Mr Surachat told the Phuket Gazette that the event was nothing more than a natural phenomenon and certainly nothing to worry about.

“Normally, mangrove crabs lay their eggs during September to November, usually coinciding with a low tide. That’s why we see them moving around in big groups toward the sea,” Mr Surachat explained.

“This is not the first time, I have seen this many times before in Phuket,” he added.

“The villagers who had watched told me that there were a lot of eggs under the crabs’ stomachs, which is a good sign. It tells me that mangrove forests in Phuket are in a healthy condition and suitable for animals to live,” Mr Surachat said.