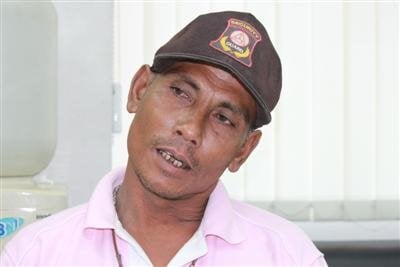 PHUKET: Phuket City Police yesterday arrested an alleged hit-man and cop killer wanted in connection with two murders last year, one in Phuket and one in Trang.

Mr Samut signed a statement denying a charge of premeditated murder in the first case, claiming that he was acting in self-defense when he killed Sompong “Jack” Inchao-na outside his home in Rassada Village 3 on March 24 last year.

After his 18-year-old son was chased back to his home in Soi Saithong by four men yelling threats, he confronted the group, one of whom was Mr Sompong, he told police.

“I was furious. I went into the house and got a knife. My son followed me back outside. I told the men to go away, but one of them kept kicking the gate, trying to get inside,” he said.

“Mr Sompong and I fought. I am not entirely sure what happened, but I ended up stabbing the man several times,” Mr Samut told police.

However, the murder of Pol Snr Sgt Maj Jaroon Toomphan, 52, in Trang, was a contract killing, Mr Samut confessed.

“I was hired to kill a policeman. There was a conflict between some local village heads [Phu Yai Baan] over some land. The police officer, Jamroon, wanted to settle the dispute through negotiation,” Mr Samut explained.

At about 10pm on November 12, Mr Samut was among three men who drove to Sgt Maj Jaroon’s house and waited at the gate in their pickup truck, he said.

Mr Samut, the gunman, shot Sgt Maj Jaroon as soon as he opened the door, he told the police.

He was supposed to get 500,000 baht for the killing, but only received 12,000 baht. He did not know the victim was an officer of the law at the time of the killing, he said.

Before fleeing Phuket and committing the Trang assassination, Mr Samut had been making a living in Phuket by stealing boats, a Phuket City Police officer told the Gazette.