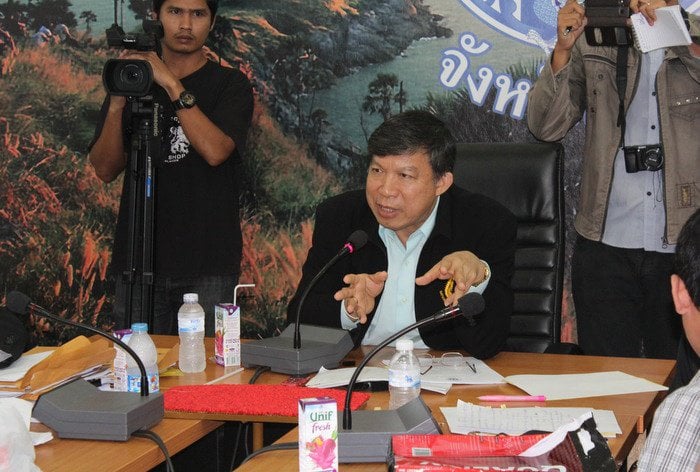 PHUKET: Nine Property (Patong) company was given two weeks yesterday to address compensation to pre-build purchasers in the Ace 1 condominium project in Phuket.

More than 30 Thai and foreign customers have sought compensation after making down payments of about 400,000 baht on the project, which was scheduled to be completed in April this year, explained Ampol Wongsiri, Secretary General of the Consumer Protection Board (CPB) at a meeting at Phuket Provincial Hall.

The condo, a nine-storey building comprising 183 rooms, was to be built on a plot of 1,600 square meters. There was to be a standard size swimming pool on the second floor, 24-hour security, a car park on the first floor, and an all-inclusive gym to help facilitate a healthy and active lifestyle.

“Though the contracts signed said that construction would start in February 2014 and end in April 2015, nothing has been built yet. The purchasers are very upset about this,” Mr Ampol said.

The CPB tabled the issue on May 19 and asked Nine Property (Patong) to draw up a letter to confirm that they would compensate their clients. The letter was to be submitted to the CPB and Phuket Governor Nisit Jansomwong within seven days.

The parent company of Nine Property (Patong) is Patong Centre, which is a Patong-based, family-run company.

“Nobody has received any money and nothing is being done. I came to Phuket to meet the purchasers and the company again. However, the company simply sent a representative, who has no authority to make decisions,” Mr Ampol said.

Governor Nisit vowed to step in and call the company to push for a quick settlement.

“The customers will have to wait another two weeks. There should be a solution then and we will inform all involved,” Mr Ampol said. “However, if the company fails to act, we will take the case to the consumer protection police division.”

The Phuket Gazette attempted to contact Ace Condo representatives via the number displayed on their website. However, the call was not answered.