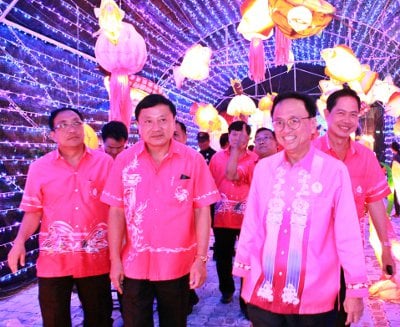 PHUKET: The clock is now ticking at Sanamchai in Phuket Town, where the “Colorful Phuket Countdown 2012” got underway at 8pm last night.

The opening ceremony was chaired by Phuket Governor Tri Augkaradacha, who took a stroll though a 20-meter-long “under the sea” tunnel of lights and decorations.

He was accompanied by Paiboon Upatising, president of the Phuket Provincial Administration Organization that is funding the event.

Tonight’s highlight will be the first round of a stage dance contest starting at 7pm.

This will be followed by musical performances by Thai country singer Tai Oratai and well-known actor and rock singer Pongpat Wachirabanchong.