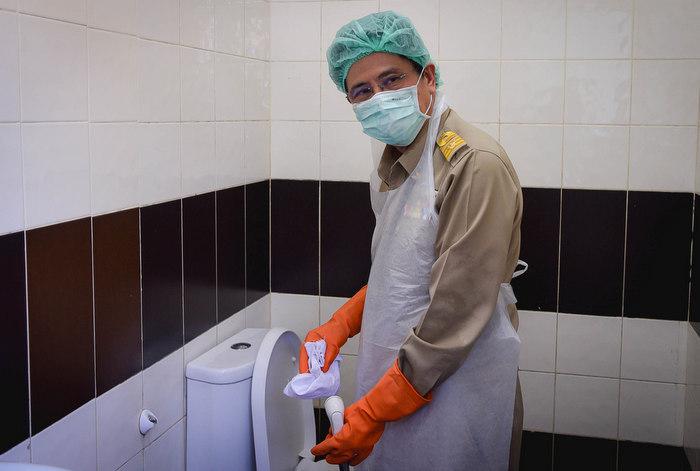 PHUKET: Armed with brushes and detergent, Phuket officials put on gloves and face masks to scrub down some of the island’s public toilets in an attempt to impress Songkran tourists this month.

“Clean public restrooms are very important for our tourism standards. Spotless toilets can impress tourists and make them want to come back to Thailand,” said Minister Kobkarn.

The first day of scrubbing got underway in Phuket under the guidance of Vachira Phuket Hospital Director Jessada Chungpaibulpatana and PPHO Deputy Chief Dr Krit Sakulpat.

“The campaign started on April 1 and will continue until April 7. However, it’s best for everyone to continue to ensure we have clean toilets,” Dr Jessada told the Phuket Gazette today.

The Happy Tourist Toilet campaign was first launched in 2014 when the Tourism Department teamed up with the government and private sectors to ensure there are clean restrooms in tourist attractions nationwide, reported The Nation.

The campaign is the brainchild of Ms Kobkarn, who initiated the network of cooperation among the tourism-related agencies to inspire caretakers of tourist attractions nationwide to put more effort into building and developing restrooms with high sanitary standards.