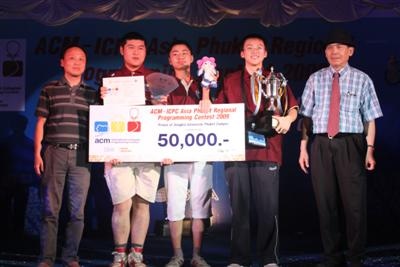 PHUKET CITY: IT whizzes from universities across Asia convened in Phuket last week to compete in an international computer programming contest.

A team from Shanghai Jiaotong University in China eventually triumphed. They will compete against the winners of other regional contests at next year’s finals in Harbin, China.

Of 27 Thai teams, the highest placing was to a team from Kasetsart University that finished 19th.

The ACM-ICPC contest has taken place every year for more than 20 years.

This year’s face-off at PSU was the first time the contest has taken place in Thailand.

It was sponsored by IBM and SIPA, the Thai software promotion agency,

Dr C J Hwang, ACM-ICPC Asia director, praised the enthusiasm of the PSU and SIPA staff who organized the event.

“Although this was the first time, I was very satisfied with their world-class performance, including the problem setting, judging and management,” he said.

There are now 300,000 students competing in the contest across the world, he said.

“The contest aims to raise the potential and skill of the students, training them to apply theory to practical problems,” he said.

Siripon Mektanatip, manager of SIPA’s Phuket branch, was pleased with the performance of the Thai students.

“It’s obvious that Thai students are now very smart computer programmers” he said. “The contest is like a stage from which they can show off their talent and develop their potential.”

He said SIPA hoped a Thai university could host the ASM-ICPC World Final in 2014.

“The chance of being chosen is quite high,” he said.