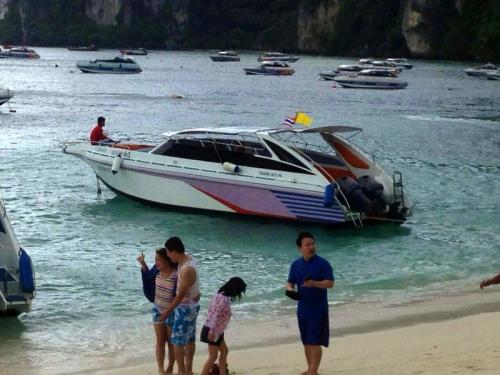 PHUKET: A Chinese tourist bled to death after being severely cut by a speedboat propeller at Phi Phi Island yesterday afternoon.

Chen Peng, 37, jumped from the boat when the engine was still on and the propeller moving, the speedboat’s owner, Chairang Weerakij, told police.

The propeller slashed Mr Chen’s legs and stomach. He was taken by speedboat from Pileh Bay to Phi Phi Hospital and then immediately transferred to Phuket Provincial Hospital, said case investigator Charan Nabpetch, who received the accident report at 1pm.

“The speedboat captain, Thanawut Sutthirak, told us that he had taken 11 tourists from Phuket to Pileh Bay on a day trip,” Lt Col Charan said.

The speedboat, Jandara 1, was anchored so tourists could play in the water. However, it was close to four other speedboats.

“A big wave came and pushed all the boats together and pushed the stern of our boat close to some rocks. The captain was afraid the boat would hit the rocks, so he decided to move it,” Mr Chairang said.

“The captain told the tourists that he was going to move the boat and they should stay inside. They agreed to stay,” Mr Chairang said. “Then he started the engine and for some reason, two men jumped out. The captain heard screaming, so he turned off the engine to see what had happened.”