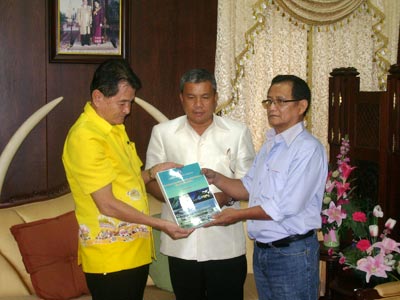 PHUKET: Representatives of a mainland Chinese construction conglomerate paid a visit to the Phuket Governor today to discuss the possibility of building a light-rail public transport system for Phuket.

The firm is part of the China Minmetals group, which last month ranked 332 on the Fortune 500 list. The firm enjoys annual revenues of just under US$25 billion.

Mr Soo was escorted by other representatives of the firm and Phuket MP Raywat Areerob.

“The traffic problem in Phuket needs to be solved. I have presented the issue to many overseas investors and this is one firm that has expressed interest in building a light railway project on the island,” Mr Raywat said.

MP Raywat said Ershisanye was prepared to invest jointly with the government in the project, but said today’s meeting was just preliminary.

Gov Wichai thanked both MP Raywat and his guest for taking the time to visit.

If built, a light rail system would go a long way to establishing the kind of public transport system needed for Phuket in its bid to host the World Expo in 2020, he said.

Mr Soo said Phuket’s reputation as a famous tourist destination and its need for a better transport system have led the firm’s interest in investing here.

“We’ll study this project and come back with a proposal as soon as possible. I think it will take about a month,” he said.