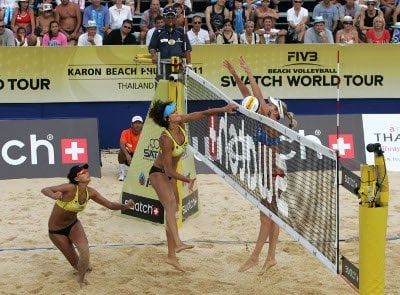 In the battle of former Phuket champions, the knee injury Zhang suffered in the semifinal yesterday left doubts over her ability to perform on court today, but Xue covered for her teammate significantly as forged an early lead in the first set, with seven-point leads at 12-5 and 14-7 after the last tied score of 2-2.

The Americans finally closed the gap to 19-16, but Zhang scored the last two points to close out the set.

A similar scenario played out in the second set, but Kessy/Ross kept the scores close with six ties early. At 6-6, Xue served an ace and she and Zhang were off running, building leads of 13-8, 17-11 and 18-12 before closing the match with strong kills and net play by both Xue and Zhang.

“My teammate carried me on her shoulders today and was always there when I wasn’t quiet there. It was remarkable to experience,” said Zhang.

“We really didn’t make very many mistakes and by controlling the tempo like that we got we really want – a happy ending. The Americans are a great team, but somehow today we didn’t miss on very many, sets, digs, kills and blocks. My knee hurts but obviously it fells a lot better know,” she added.

Reflecting herself on the title match, Xue said, “This was the last competition of the year and it’s very important to end it well, which we did this week. My teammate is injured, but it hardly showed during the match.

“She is tough and what showed was how all of our practice and hard work prepares you for different situations and we played extremely consistent this entire tournament,” she said.

The first set was very tight, with six ties and two lead changes as the Italians overcame a 12-15 deficit to take the lead at 18-17. After a tie at 18-18, Cicolari/Menegatti closed out the set with a Menegatti kill and a Cicolari ace to go up 20-18.

In the second, Australia scored first and after three early ties, Cicolari/Menegatti took the lead at 4-3 and quickly built it up to six points at 12-6. Australia then called a medical time out for back spasms. After the five-minute time out, the Italians kept the Australians five points down until the final margin at the finish.

Italians Cicolari/Menegatti picked up US$15,000 for wining the bronze medal, and Australians Bawden/Palmer will divide $11,200 for placing fourth.

Also on site in Phuket was a special production crew from IMG, the company that not only produces the live international telecasts of select matches, but also the weekly FIVB Beach Volleyball Swatch World Tour highlight show that is syndicated throughout the world.

The Phuket Gazette and PGTV are charter sponsors of the FIVB Volleyball events in Phuket.