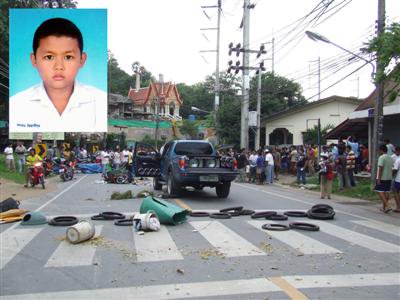 CHERNG TALAY, PHUKET: An adamant group of protesters continued to block a 300-meter stretch of Srisoonthorn Road in Baan Bang Tao most of today, demanding police catch the man responsible for the shooting murder of 12-year-old Amornthep “Gaga” Panya-sirikul.

The group finally disbanded late this afternoon following unconfirmed reports that the shooter was about to turn himself in to authorities.

Several witnesses – mostly children – said Gaga was shot point blank in the left temple as he was playing video games at the Dr Com Electronic Center in Baan Bang Tao.

The shooter, who remains at large, was identified as 34-year-old Ekawood Pipatratana.

For the original report of the shooting and how Mr Ekawood made his escape with the victim’s body, click here.

The street protest, which has greatly inconvenienced local residents and tourists, began at about 3pm yesterday.

It continued even after Gaga’s body was found by police, dumped in a marshy area near Sala Daeng Junction in the Nai Yang area at about 5:30pm yesterday.

Before police found the body, there were about 500 protesters.

The number dwindled following a visit to the boy’s home and the protest site by Governor Wichai Phraisa-ngop at about 9:30pm yesterday.

Gov Wichai, who also visited the Cherng Talay Police Station, assured the family that Mr Ekawood would be in custody within three days.

Most of the protesters seemed to accept the governor’s reassurances and disbanded, but about 30 of them continued their blockade of a 300-meter section of road in front to the Baan Bang Tao School through the night.

The family of the slain child were not among the protesters.

Sompong Prachai, who lives next door to the murdered child, told the Gazette this morning, “Gaga’s parents and relatives don’t want to inconvenience people who need to use the road. They left the protest after talking with the governor, but there are a few villagers from the Surin Beach area who are continuing the protest,” he said.

Cherng Talay has been the site of numerous street demonstrations and protests over the years, many of them directed against police by local residents.

Gaga’s mom talks to the Gazette, issues ultimatum to police