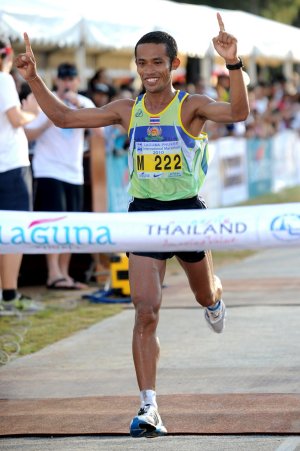 Charkrit Boonkong won the men’s event in 2:40:08, just over two minutes off the course record time of 2:37:53 set by defending champion Stephen Paine from Australia in 2008.

Despite the violence in Bangkok last month, the event attracted a record number of entrants: more than 4,600.

Among the multinational field, Thai runners stole the show. Charkrit, competing in his first Laguna Marathon, pulled away from Paine around the 17-kilometer mark.

Paine was the strong favorite to win the race for the third successive year, but found himself fading as the sun rose and temperatures began to soar.

Boonkong, perhaps more familiar with the sweltering conditions, gradually increased his lead and crossed the finish line in 2:40:08.

Thanyathorn set a new course record in the women’s event, finishing in 3:21:24, 30 seconds ahead of fellow Thai Amnuay Kiamgoolearn.

The marathon was not just for the elite athletes. The biggest cheer at the prize-giving event was reserved for two of Asia’s Biggest Losers TV show fame. Phuket resident Garry Holden and Suthat ‘Tony’ Charnvises, who lost 90kg between them within six months, yesterday competed in their first marathon event.

Holden, who finished the half-marathon in 2 hours and 10 minutes, vowed to compete in the full marathon next year.

Tuk-tuks blockade US military in Phuket