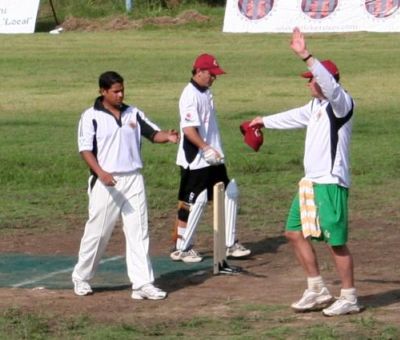 KARON: Former Australian international cricketer and Phuket regular Trevor Chappell was in exceptional form with the bat, stroking a breezy 31 not out for Lamma CC of Hong Kong in his first match of the Phuket International Cricket Sixes, which began today.

His welcomed performance at the crease against the Perth Postels followed a sudden deluge of rain that forced play at Karon Stadium to be suspended for about an hour.

Paul Hutchinson of Lamma CC retired with 32 runs, helping Lamma post a useful total of 72 runs in a reduced-over match.

Perth Postels had little answer to the Lamma total, although their spirits were lifted by the performance of Brian Shaw, who scored 29 not out.

Lamma, who were rocked by a back injury to Paul Hutchinson during the match, won by 18 runs.

The first match of the tournament earlier in the day saw Kiwi newcomers to the Sixes Weraroa take on the Entertainers. Weraroa posted a useful 74 runs, with Scott Rogers notching up 24 runs.

Despite Stu Davenport scoring 32 not out, the Entertainers failed to win the match.

Also new to the Phuket Sixes, the Delhi Medical Association, who boast every player being a doctor of medicine, were pipped for a win by the CBB Postels.

Dr Shashi was the top scorer for the medicine men with 24 runs, but CBB, no strangers to this short form of the game, won the match with an over to spare and Kenny Jackson retiring 32 not out.

The scheduled 13 matches were played during the day despite the early rain. Play finished on time at 5:30 pm.

First ball tomorrow is at 9:15 am, and the charity Twenty20 match gets underway under floodlights at 6:30 pm.

The tournament finals will be played on Sunday.

Booze ban set for this weekend