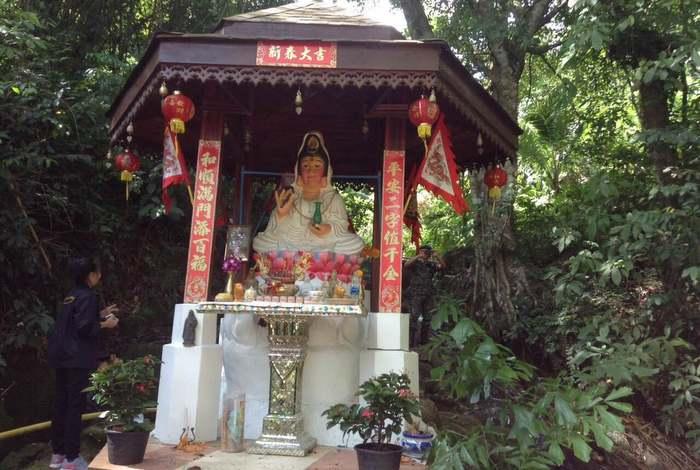 PHUKET: A bodhisattva image will be removed from a small waterway in the hills of Chalong following an investigation by the Phuket Damrongdhama Center (ombudsman’s office).

A Facebook user, named in Thai as ‘Sajadham Tang-sai-klang’, sent a complaint directly to Phuket Governor Chamroen Tipayapongtada stating that the image of Guan Yin was blocking a natural waterway.

The Guan Yin, usually represented as a female, is venerated by East Asian Mahayana Buddhists. The image was preventing local people from using the water for planting and cleaning, Mr Sajadham said in his complaint.

“The shrine is about one kilometer from Wat Luang Phu Supha. Though it’s not a big shrine, it is clearly obstructing water flow,” said Prapan Kanprasang, chief of the Phuket Damrongdhama Center, who inspected the site along with officials from the Phuket branch of the National Office of Buddhism.

The shrine is built on a half rai of land that had been donated to the Namtok Wang Than (Wang Than waterfall) meditation center about seven years ago.

Mr Komol explained to officials that local Buddhists had come together to build the image, and then bequeathed it to the temple.

“Though Mr Komol is only in charge of taking care of the shrine, he has agreed to talk with the abbot of Kata Temple to have the image moved, allowing the water to once again flow freely,” Mr Prapan said.