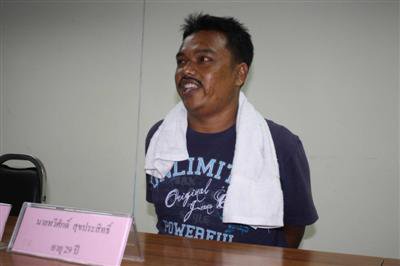 PHUKET: Police have arrested a man wanted for shooting dead an 18-year-old student on Wiset Road in Rawai last week.

Chalong Police led by Superintendent Wichit Intorrasorn held a press conference yesterday afternoon to announce the arrest of Thaweesak Sukprasit, 29, who was arrested by police at his home in Chalong Village 7 on Sunday.

Also known by the alias ‘Tum Chalong’, Mr Thaweesak was wanted for the June 15 shooting murder of Thawatchai Boonyeun, a student at Phuket Technical College.

Mr Thawatchai was gunned down in front of the Bangchak Petroleum service station on Wiset Road in Rawai.

The youth died of two bullet wounds after being shot allegedly by Mr Thaweesak, who was released from prison three months ago after serving a five-year sentence for selling ya bah (methamphetamine).

Mr Thawatchai was shot in one arm and once in the heart.

Friends rushed the youth to Vachira Phuket Hospital, but he died en route.

Mr Thaweesak, a builder specializing in window construction, denied any involvement, saying he was working in Cherng Talay at the time of the shooting.

However, police say they have witnesses who can identify Mr Thaweesak as the shooter.

According to the witnesses, police said, Mr Thawatchai was driving a motorbike with two friends riding pillion, heading to his home in Bang Khontee.

Police reported that five men on two motorbikes approached from behind, addressing the youths with the vulgar Thai pronoun meung and asking, “What are you laughing at?”

Then a heavy-set man with a facial scar who was riding pillion pulled a gun from a bag and shot Mr Thawatchai, police said.

However, police did not specify any possible motives for the killing.

By all accounts, police said, Mr Thawatchai was a friendly person, loved by his parents and friends, and had no enemies.