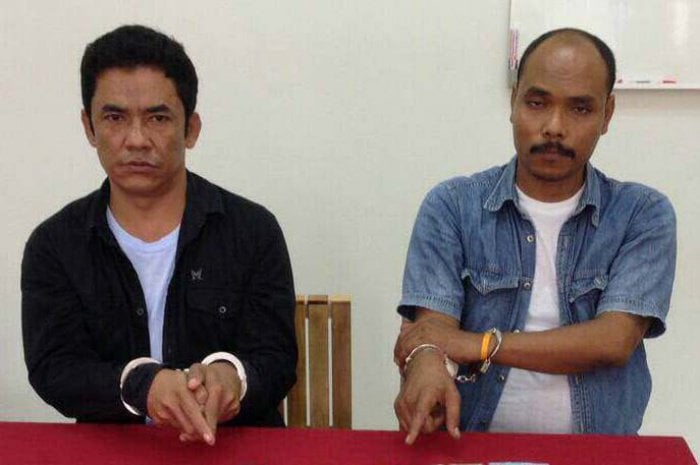 PHUKET: Two men were caught in Phang Nga attempting to smuggle more than 25,000 ya bah (methamphetamine) pills into Surat Thani on Wednesday.

Sophon ‘Khong’ Suwannarat, 37, confessed to police that he had agreed to transport the drugs in order to pay off a 50,000-baht gambling debt, while Paisarn Ratmanee, 40, denied any knowledge of the drugs.

“Police were tipped off by an undercover investigator that the men would be picking up the drugs in Phang Nga Town before heading over to the drop-off point in Surat Thani,” said Phang Nga Provincial Police Commander Chalit Kaewyarat in a press conference on Wednesday.

“A team of officers was waiting when the men arrived in Phang Nga Town. Police searched the car and found 25,816 ya bah pills hidden inside.”

Police seized the pills, the car used in the crime, 5,000 baht in cash and two mobile phones.

“During questioning, Mr Sophon explained to us that his debt would be remitted if he could successfully deliver the drugs to Surat Thani,” said Gen Chalit.

“However, Mr Paisarn claims he is innocent and had nothing to do with the transaction. Mr Sophon corroborated this, explaining that he only called Mr Paisarn for company on the drive and had agreed to take Mr Paisarn gambling afterward.”

Regardless, both men were charged with possession of a Category 1 drug with intent to sell, confirmed Gen Chalit.

“We are now working with Surat Thani Police to investigate the people who set up the drug transaction, both here and in Surat Thani,” he added.

Phuket told to conserve power ahead of energy shortage