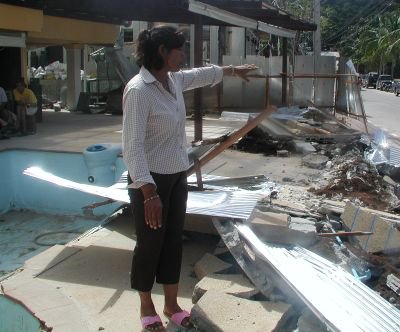 PATONG: As Patong Mayor Pian Keesin was sitting down with TAT officials yesterday to discuss remodeling of the town’s tsunami-damaged beach road, a backhoe operator hired by the town was already at work tearing down parts of roadside resorts damaged by the tsunami.

Owners of the properties on a 250-meter stretch at the south end of Thaweewong Rd complained that the town had begun the demolition without presenting them with official papers authorizing the work.

Waraporn Sundqvist, owner of The Beach House for the past seven years, told the Gazette, “They told me that even though I have legal title to the land, they are still going to tear down everything within two meters of the curb.

“I asked if they would wait until the city came out with an official announcement regarding the work, but they told me that Mayor Pian had come to the site with them in the morning and ordered them to begin here,” she said.

“There are many accommodation units along this stretch that have been destroyed. I would understand if they had treated everyone equally, but there other properties along here, such as the Seaview, that haven’t even been touched.

“I want the government to help us to recover after tsunami, not make matters worse. They have destroyed property that was left standing after the tsunami. Who is going to take responsibility for this?” she asked.

Nootsara Yangyuen, owner of the nearby Sea Dream Guest House, said the Mayor had ordered similar work at her property, damaging 10 rooms and destroying newly installed telephone lines and water pipes in the process.

“They just ripped down the roofs without even giving us time to remove our belongings from inside,” she said.

Patong Municipality Chief Administrative Officer Phunsak Naksena met with both hotel owners and assured them that they weren’t being singled out, and that the demolition work would eventually extend the entire length of Thaweewong Rd.

He said that the Municipality had posted announcements in the area, but that some had been torn down. He added that the property owners could write to the Municipality to complain, and efforts would be made to work out a solution at a later date.

Aaron, a Californian who declined to give his full name, said he had been considering investing 20 million baht in the area, but that the demolition work had caused him to rethink.

“People had just started to rebuild their lives. Now [the local authority] just comes in and destroys all the work they have done. The tsunami didn’t destroy all these walls … they survived until this morning when they were destroyed [by the Municipality],” he said.

Justifying the demolition, Deputy Mayor Chairat Sukbal told the Gazette that the work had been officially announced and was in accordance with the Building Control Act, which forbids construction within 15 meters of the centerline of any public road.

Compliance with the Act, which went largely ignored before the tsunami hit, is now a stated cornerstone of the city’s waterfront redevelopment scheme. Critics, however, wonder whether the Municipality, given its track record, will be able or willing to enforce the regulation comprehensively and fairly.

K. Chairat, who also owns the Safari Club, added that any reconstruction had first to be authorized by the town, which is required by law to inspect structures to ensure they were not weakened by the tsunami.

“Most business owners are willing to cooperate fully with the Municipality. There are only a few people who don’t want to comply with the regulations,” he said.